A Brew for You: Civil Life's "Big Year Brown"

Question: Is there any brown ale in this city better than Civil Life's (3714 Holt Avenue) "American Brown?" Answer: Yes, Civil Life's "Big Year Brown," newly released and ready for action. There's more flavor and a heftier ABV, but as brewery owner Jake Hafner points out, this is a very drinkable beer.

"You can still really enjoy it and have a couple in one sitting," he explains.

The "Big Year Brown" is the first installment in a series of three Civil Life beers (the "Big American Stout" and "Gordian Knot Bock" will soon follow) that each promise to be darker and heavier than the brews you'd typically find at the brewery, coming in at around 6.5 to 7 percent ABV. Though still a couple weeks away from completing fermentation, we were lucky enough to try out an early version of the "Big American Stout," and it was pretty amazing. Overall this is a chance for Civil Life to demonstrate its ability to go big, but the main focus will continue to be highly enjoyable and easy to drink varieties that have made the south city brewery a favorite locally. 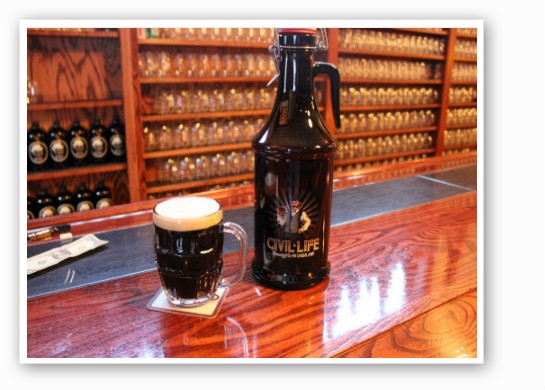 The "Big Year Brown" itself is both a celebration of remarkable progress made and an expectation-setter for the coming year. The brewery added two new fermenters, expanded distribution across the river to southern Illinois and by the end of August should have a canning line in operation. There's a lot going on, so why not commemorate the moment with a great new beer?

Using the very popular "American Brown" as a starting point, Civil Life amped up fermentation and threw in some sort of black magic to produce the "Big Year." Hafner describes it as "pumped up," and "more intense," stronger than the 4.8 percent ABV of the regular "American Brown." The same flavor is still there -- rich and creamy, with coffee tones mixed in. After conducting a side-by-side comparison, "Big Year" is more chocolaty and thicker -- both are exceptional beers, but the "Big Year" will satisfy those beer aficionados who crave robust, dark brews.

The "Big Year Brown" just shipped out to: The Royal, Amsterdam Tavern, Baileys Range, The Crow's Nest, 5 Star Burgers, Itap Soulard, Mangia, The Bridge, Flying Saucer, Dressel's Public House, The Block Restaurant and Butcher Shop, and soon after will spread around to smaller establishments. You can also stop by the actual brewery for a pint or half-pint, but be warned, Hafner says the "Big Year" is "the fastest moving beer we've ever had outside of our anniversary Oktoberfest," and he expects they'll run out within the next two weeks. Jump to it.