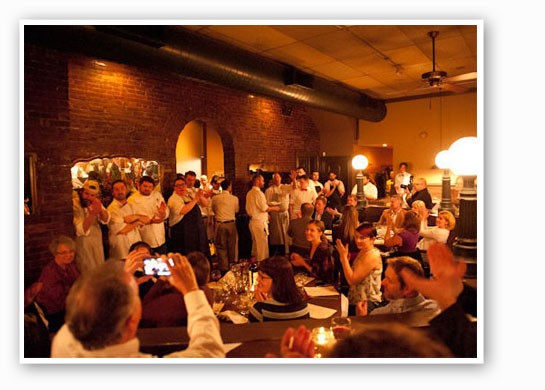 Sidney Street Café (2000 Sidney Street; 314-771-5777), the esteemed Benton Park restaurant, celebrated its tenth anniversary this past Monday with a celebrity chef-studded celebration. This gathering of culinary greats, entitled "Ten Years, Ten Chefs," featured notable St. Louisans, as well as chefs from San Francisco to Washington DC, all contributing to an over the top anniversary dinner.

Gut Check was lucky enough to snag a seat to the sold-out event. If you missed it, take a look at some behind-the-scenes shots of the chefs hard at work and get a peek at the menu.

The restaurant was packed with a sold-out crowd of Sidney Street's admirers who were there not only to experience an amazing meal, but also to pay their respect to the venerable house that owner Kevin Nashan built.

The evening began with a cocktail and appetizer hour, with small bites prepared by Nashan, together with local chefs Josh Galliano (the Libertine), Kevin Willman (Farmhaus) and Patrick Connolly (Basso). From sea urchin to charcuterie, Nashan and company set a decadent tone for the rest of the evening.

The main event was an eight course tasting menu, with eight chefs taking responsibility for their own individual dishes. Just arrived from DC, John Shields (formerly of Chilhowie, Virginia's Town House and Chicago's Charlie Trotter's and Alinea) kicked off the dinner with a supremely decadent presentation of herb-cured scallops with butter, mustard, and an elderflower gelee. The scallops, golden in color, were so creamy that they pleasantly lingered on the tongue long after the first bite. It was like biting into silk.

For the third course, Chef Gerard Craft (Niche) took cauliflower's blank canvass and imbued it with a rich lamb jus, then accented it with fleur de vallee cheese, lemon brown butter and crème fraiche. An over easy egg topped the dish, it yolk serving as a rich sauce.

Nashan and company know how to throw a party. While no one was worried that the food would be anything short of fantastic, pulling off such and intricate dinner for a large crowd can pose challenges. The Sidney Street team made it look effortless. Whatever chaos was going on behind the scenes (there always is), diners received perfectly plated dishes, hot food, prompt wine pairings and impeccable, unhurried service.

Click through to see more behind the scenes photos and read the menu in its entirety. 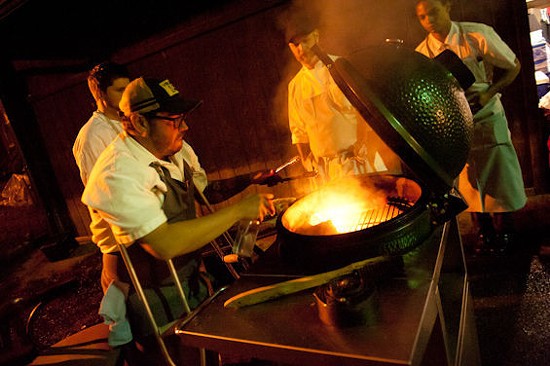 After the jump, read the full menu.