Critic's Notebook: Gamlin Whiskey House's Ivy Magruder on How to Cook with Whiskey 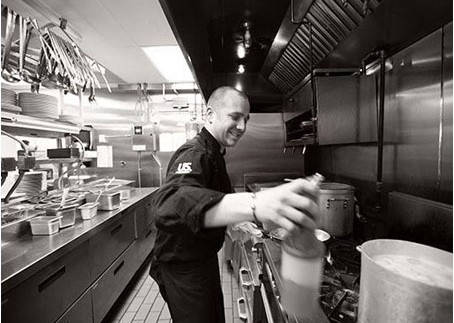 Chef Ivy Magruder wasn't always a whiskey aficionado. "My dad was a Jack [Daniels] guy, and I was more of the shot of Jameson on St. Patrick's Day kind," he says.

A lot has changed, then, as Magruder solidifies his whiskey street cred as the culinary force behind Gamlin Whiskey House (236 North Euclid Avenue; 314-875-9500) in the Central West End. Brothers Lucas and Derek Gamlin (of SubZero Vodka Bar fame) enlisted the help of Magruder to craft the bourbon-themed menu, even though he was somewhat of whiskey neophyte. See Also: Gamlin Whiskey House Is a Warm, Welcome Retreat

Formerly of Vin de Set, Magruder knew that he wanted to "hitch his wagon" to the Gamlins. "These guys are visionaries," he says. "I was happy where I was. Life was good, but I wanted to spread my wings."

So how does one go about crafting a menu for a whiskey house with limited whiskey knowledge? Before Magruder took the wheel at Gamlin, he had been studying up on whiskey in order to stay up on current trends. Once at Gamlin, it was a matter of trial and error, with a little help from his toughest critic -- his wife.

"I may not know everything about whiskey, but I know flavor profiles," explains Magruder. "I asked Derek and Lucas to tell me everything they could about the flavors of the different whiskeys, and I built the menu that way. It's kind of like wine pairing. You take flavors that compliment or contrast with the food and go from there. In whiskey you have smoke and citrus and honey and caramel, so you build your dishes from there."

It helps that the culture at Gamlin is one of collaboration and education. "This place is a learning environment," notes Magruder. "Whether it's how to cut a carrot better or how to pair Scotch, everyone teaches everyone here. I learn something every day from the dishwasher, the servers, the whiskey sommelier. It's collaborative."

The other word Magruder repeats when discussing Gamlin is "approachability." For this reason, Gamlin calls out its whiskey sommelier on the weekends to guide guests through what could be seen as an intimidating drink menu for novices.

"People come in and say that they don't like whiskey. We tell them that they just haven't found what they like," he says. "We're trying to demystify whiskey."

Now that it has been demystified for Magruder, what does he drink? "I always wanted to be a Scotch guy. You know the guy who goes into a bar and orders a Scotch? He's the coolest guy in the room. I'm just not that cool," he laughs. Instead, he opts for Gamlin's smoked Manhattan. "There's this tube that actually incorporates smoked wood chips into the drink. The sommelier holds it up to this Gandolf-looking glass pipe, and you drink it through the straw. It's awesome."