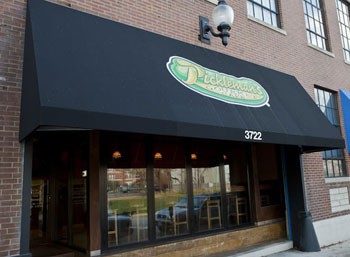 It's not ideal to have a giant snowstorm two days before your grand opening. But Pickleman's franchisee Brad Merten still has high hopes for the cafe's thirteenth Missouri location. Pickleman's Creve Coeur opened last night, January 7, at 5 p.m. Merten and his partner Brandon Holzhueter also own the midtown location.

See also: Build a better sammie, and the college kids'll beat a path to your door.

"We kind of jumped through all the hoops and hurdles the first time, so we thought the second time would be easier," Merten tells us. "I can't say it has been easier, but we learned a lot."

Pickleman's Creve Coeur will be pretty much the same as the other locations, but it's the first with a more "modern, cleaner and sleek" look, Merten says. The chain was founded in Columbia in 2005 (recent Mizzou grads are some of its biggest fans), and Merten has been with the company since the beginning. The midtown location opened in 2010.

Merten says he and Holzhueter always knew they wanted to open more locations. They've finally gotten to a place where they have very capable managers and good employees and felt comfortable focusing on a second Pickleman's.

The delivery radius is still up in the air, though it's usually within a five-minute drive. That may need to be adjusted because of the heavy traffic in the area, Merten says; he estimates it will go as far north as as Page Avenue, east of Lindbergh Boulevard, and south of highway 40, possibly as far west as Mason Boulevard. The cafe will be open and delivering seven nights a week until midnight.

"We're hoping we get the best turnout we can," Merten says. "We understand the weather, so when the snow melts, we'll still be here."