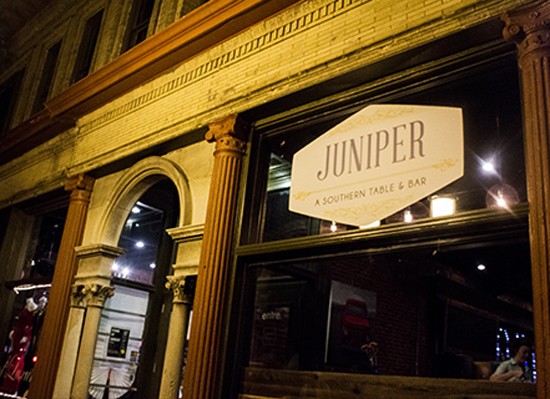 Rambling man John Perkins had one of the most highly anticipated openings of last year with Juniper (360 North Boyle Avenue; 314-329-7696), the southern table and bar located on the northeast edge of the Central West End. Perkins made his name, first as the not-so anonymous chef behind a series of underground dinners, and later as the brains behind themed pop-up dinners, such as the southern-influenced A Good Man Is Hard to Find and Le Coq. With Juniper, Perkins finally puts down some roots.

This week I visit Juniper to see if Perkins is able to translate his transitory vision into a lasting success. Here is a sneak preview of my thoughts -- the full review will be online tomorrow and in this week's issue.

"I took the liberty of ordering us the breadbasket," my friend told me as I settled into my seat. "It's going to be ridiculous."

I can't believe she was able to exercise restraint and refrain from digging into the platter of baked goodies until my arrival -- that should have been my punishment for being late. But there they were, spread out before us like a scene out of Dr. Atkins' nightmares. There were flaky angel and buttermilk biscuits with crumbly, shortbread-like edges. There was a rich, savory popover and sweet cornbread, still warm from its cast iron pan. And then there were the hush puppies. Oh the hush puppies.

The bread service, though, doesn't come for free - as has become expected at most of St. Louis' finer restaurants. Juniper charges $9 for the privilege. And let me tell you, it's worth every penny.