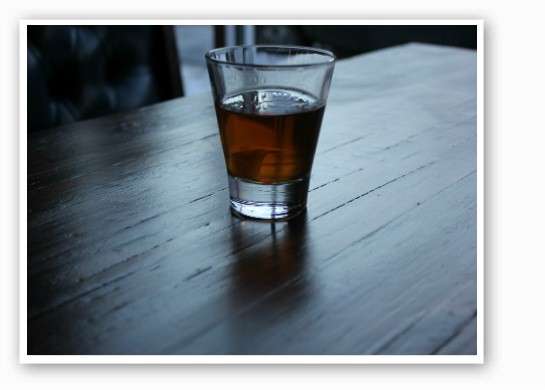 There's a certain sincerity hovering about the Whiskey Ring (2651 Cherokee Street; 314-769-7249), Cherokee Street's new whiskey bar. Upon our arrival, co-owner John Joern saw us sniffling and coughing and being all sick and immediately whipped up a hot toddy. It's a friendly place, built with blood, sweat and tears -- and probably a lot of whiskey, too.

Once, opening a bar was just a pipe dream for John Joern and Jason Matthews. "I had no intention of opening a bar this year," explains Joern. "It was supposed to be down the line a little bit." But when an attractive space on a highly trafficked corner of Cherokee opened up, along with the encouragement of the brilliant minds behind the Fortune Teller Bar, destiny seemed to be knocking. First, though, as ideal as the location was, the interior needed major work. Luckily both Joern and Matthews have experience in construction and managed to take on roughly 90 percent of the job themselves -- everything from reclaiming wood, building a custom bar and shopping around on Craigslist for leather booths.

"I had the concept of a whiskey bar in my head already, and I knew I could sell that product," says Joern, but everything happened so fast that it became a mad dash to come up with branding and a name. Fortuitously, Kristen Dennis, co-owner of the Fortune Teller, paid attention in a history class somewhere along the way, and suggested referencing the Whiskey Ring Scandal of the late 1870s, which involved corruption in the White House and tax invasion, and -- even better -- had major ties to good ol' St. Louis. A prime spot along Cherokee Street, a catchy name and plenty of whiskey -- the basics were covered. "So now we have a bar, and two weeks in, I couldn't ask for better. Business is beyond our expectations," Joern says. He credits the goodwill and general excitement surrounding the neighborhood, noting, "Community support down here on Cherokee has been phenomenal."

Both Joern and Matthews bring extensive bartending and managing skills from years spent at Off Broadway. Now they have a chance to slow down and experiment with their own cocktail list, which will appear early next week. And with the recent rediscovery of whiskey both nationwide and locally, the time seems ripe.

The drink list, with more than 50 kinds of bourbon, rye and scotch, will skew toward Prohibition-era classics like the well-known Old Fashioned or a Blood and Sand, but also standards like a Boulevardier, and original drinks like the "Stockton Pride," a bourbon and whiskey mix with black-walnut bitters. Just as impressive, there isn't any price gouging: All cocktails fall within a $6 to 9 range.

Beer will also soon be available with a draft system set for installation (all local brews). Joern makes the strong point that, "All really nice craft beer and a really nice craft whiskey lend themselves perfectly."

The Whiskey Ring is open daily from 4 p.m. to 1:30 a.m. There's no kitchen, but there are plenty of places to grab a bite nearby. Keep an eye out for weekly whiskey flights and monthly seminars to help learn more about your favorite whiskey and try out something new.