Quincy Street Bistro (6931 Gravois Avenue; 314-353-1588) may seem like a long way from the high-end halls of the now-shuttered An American Place, but chef Rick Lewis doesn't think so. "We're serving just as good of product here as at any fine dining restaurant," Lewis tells us. "We want to give people an option for quality, real food in a casual, comfortable setting."

Now in its second year, Quincy Street Bistro has gained quite a following among industry insiders and south-city locals for its brand of housemade comfort food that uses the same locally sourced, high-quality ingredients as the most upscale restaurants in town. Building on the knowledge gained from working at some of St. Louis' hallowed kitchens, Lewis mixes the best of that world with the charm of a family bar and grill.

I recently spoke with Lewis to learn about his food crushes, rituals and the state of the St. Louis food scene, but I ended up wanting nothing but his mom's spaghetti.

Please, Chef Rick -- put it on the menu.

What is one thing people don't know about you that you wish they did? I think I'm pretty much an open book. If you know Rick Lewis, then you know me and all that entails, good and controversial. That may be good and it may be bad, but it's real. What daily ritual is non-negotiable for you? I'd be lying if I didn't say letting my dog Chili out for a morning dump. No, but really, probably my morning phone call to my dad on the way to the restaurant. He's my mentor and counselor. Also my evenings before bed with my wife, Elisa. She is the greatest -- makes me a better person and deserves more time with me. If you could have any superpower, what would it be? The ability to read minds! It would make this restaurant stuff easy. Or whatever wolverine has cause he's a stone-cold BAMF.

What is the most positive trend in food, wine or cocktails that you've noticed in St. Louis over the past year? The growing passion and appreciation for all of it that the good folks of St. Louis have! I don't just mean the white collars, foodies and industry folks. I mean the everyday blue-color people I see each day at Quincy Street. The people who wouldn't normally try new things but are now doing so. It's awesome! 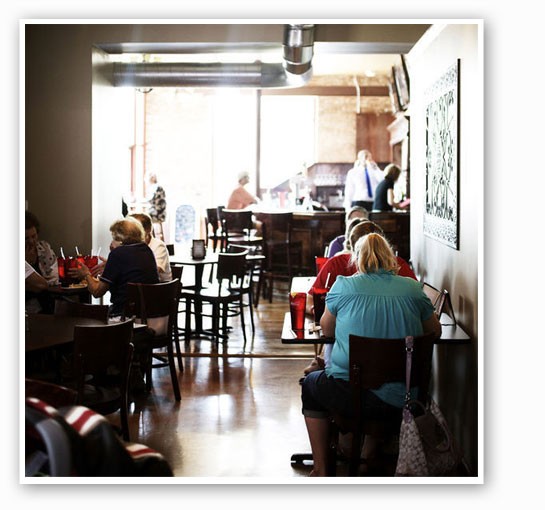 Who is your St. Louis food crush? See, that's a hard one...I find myself sending three of St. Louis' finest industry folks inappropriate things via group text. It would be a coin toss between Andy Karandzieff [Andy Candy], Mike Emerson and Kevin Nashan. I love these dudes with my whole heart.

Who's the one person to watch right now in the St. Louis dining scene? Chris Bolyard! He is a total badass, getting ready to explode in this town.

Which ingredient is most representative of your personality? The pork butt: "I can be a bit tough, but cook me low and slow, and I will be tender and oh so buttery sweet!"

If someone asked you to describe the current state of St. Louis' culinary climate, what would you say? The calm before the storm. There are a lot of young chefs out there, including myself, who are just itching to do something in this town. It's great!

Name an ingredient never allowed in your kitchen. Fake butter...groooooss. What is your after-work hangout? After work -- when's that? I'd have to say my couch with a bourbon.

What would be your last meal on Earth? My mom's Friday spaghetti. It's not anything fancy -- spaghetti tossed with garlic, chili flakes, crushed tomatoes, butter, olive oil and topped with lots of parmesan but MAN OOOUI! It's one of those things that transports you back to your childhood. I would have to think that would be worth its weight in gold for your last meal.