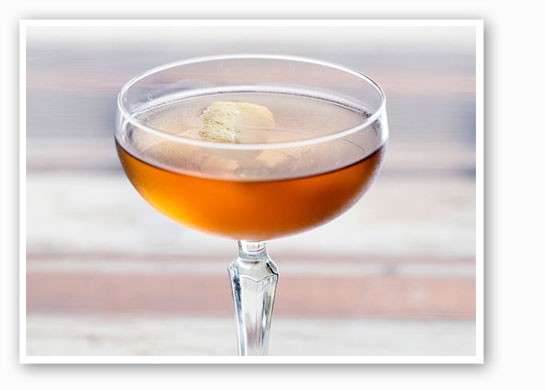 Some of St. Louis' best bartenders will be slinging drinks at Mad Art Gallery (2727 South 12th Street; 314-771-8230) on Tuesday, December 10, and competing in the North American Spirits Championship -- a.k.a. Dishcrawl's Cocktail Wars. Each one is distinct; read on for more detailed descriptions.

"This is our first cocktail competition, and I'm just so excited. We've got some really amazing bartenders around town," says Dishcrawl spokesperson Sara Graham. "These drinks are going to be extremely well thought out and handcrafted."

First up is the "Misfire" from Tyler Baublitz of Eclipse (6177 Delmar Boulevard; 314-726-2222). "It's basically a play on a shot and a beer," Baublitz tells us. "Being a bartender, no matter how good of a bartender you are, you're always going to be pulling shots and beers. So that's kinda how I wanted to play on it."

The "shot" component is whiskey and a chai tea simple syrup that Baublitz makes, served in a cordial glass. The "beer" is more like a carbonated punch, made with Pinckney Bend gin, Big O ginger liqueur plus a cranberry cordial. "You kind of have two opposite spectrums -- the shot's got a lot of spice coming from the chai tea, and the beer is like ginger and cranberry, and lighter because it's carbonated."

Kyle Harlan from Mission Taco Joint (6235 Delmar Boulevard; 314-932-5430) will be competing with a "Kentucky 75," his take on the classic French 75. "I used to run a place called the Standard. It was a speakeasy, not menu-based, so every drink I made was based off an interaction with a customer," Harlan says. "It was a drink I just threw together for some friends and really liked."

The "Kentucky 75" is bourbon based and uses sugar cubes soaked in vanilla instead of bitters. Harlan mixes the bourbon with raspberry and apple syrups before pouring over the sugar cubes, then he tops it with Champagne.

"It's got sweet elements that the bourbon counteracts. That vanilla actually pops through more than anything, which is surprising," Harlan says. "The way the caramels and oaks interact with the fruit -- the Champagne really dries it and balances it out."

The drink combines bourbon with Big O liqueur and vanilla, lemon, apple, brandy and black-walnut bitters. Arndt calls it an elaborate sour, approachable and well-balanced. "It tastes like fall. They're the most delicious bitters I've ever had, but I wouldn't put them in just anything. It's really something to accent whiskey," Arndt says. "While the drink itself is cold, it's got a lot of really warm characteristics. I could sit there and drink it all day."

Matt Osmoe from Katie's Pizza & Pasta (9568 Manchester Road; 314-942-6555) will compete with his "Julieta Cabassac," which was inspired by the book The Fly-Truffler by Gustaf Sobin. A lonely man falls in love, but his young wife (the eponymous Julieta) dies shortly after. The drink was inspired by one of his memories of her.

"She's been picking flowers and she's kneeling in this field. He describes her beauty in great detail. The flowers, the herbs and her hair in the sun -- it kind of stuck in my head," Osmoe says. "I wanted to create a drink based on that moment, since he was so vivid about the smells. I just built the cocktail from smells -- it builds a perfume in the glass."

Arndt uses two types of gin, Uncle Val's and TRU Organic, plus ginger cognac and elderflower liqueur with rosemary and a lemon twist. "I'm just gonna do my thing. I don't wanna get fancy or anything like that," he says. "I just want to make sure that it's done accurately to the consistency that I want, the profile that I want. As long as I can pin that down, I'll be happy. As long as I don't fall off the stage, that would be better."

Stephanie DiCamillo of Mango (1101 Lucas Avenue; 314-621-9993) and Cafe Eau (212 North Kingshighway Boulevard; 314-454-9000) submitted a "Thai One On," inspired by her love for Thai food. It combines sake, lemongrass, kaffir lime and ginger. DiCamillo is out of town until the day before the competition, but we'll update with her thoughts when we hear from her.

You can get tickets for Tuesday night's event here starting at $10. Tickets will also be available at the door. The competition starts at 7 p.m. at Mad Art Gallery. There will be judges (including our own Cheryl Baehr), but the audience gets to vote as well. Which cocktail would you pick?

"I think I'm going to have fun. Two of my really good friends, Tyler and Matt, are competing with me," Harlan says. "I'm just going to see if I can't learn a few things from the two of them and hopefully do better than them!"