At 9 a.m. on Black Friday, shoppers began lining up outside Wolfbrau House of Beer (286 Mid Rivers Center; 636-242-1040). By the time the store opened at 11 a.m., the queue had grown to 30 people. These were no ordinary post-Thanksgiving customers -- these were beer geeks.

Some had already made a stop or two at other beer retailers. These and other hop heads all across the metro area were seeking out Goose Island's Bourbon County Brand Stout -- or BCS as local fans call it (no one says "Brand" out loud). Wolfbrau sold its entire allotment of the beer within 35 minutes of opening its doors. Luckily, it had just enough for everyone in the line. Then many of these Bourbon County fans hopped into their cars and drove on to another beer spot, hoping to buy more. 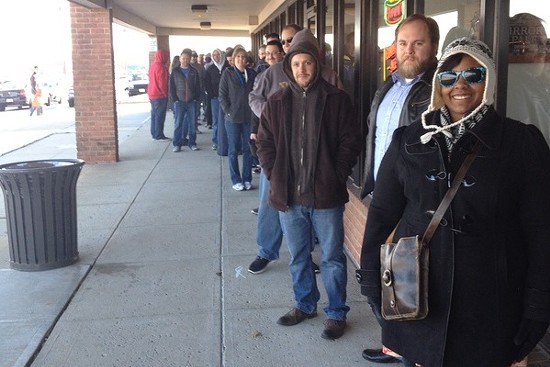 Since AB-InBev acquired the brewery in 2011, Goose Island has ramped up production of all its beers, including Bourbon County Stout. In that time, brewmaster Brett Porter says that the brewery has doubled the number of bourbon barrels used for aging the beer to just over 2,500. This expansion allowed Goose Island to release the beer nationally this year for the first time ever.

"We were excited to have the opportunity to take our special beer Bourbon County Stout national," Porters told Gut Check, "but like any other rare beer we had some challenges. The major challenge we faced was the amount of beer we could distribute to all 50 states. It was not an easy decision but one that still allowed all 50 states to receive a portion of the beer." 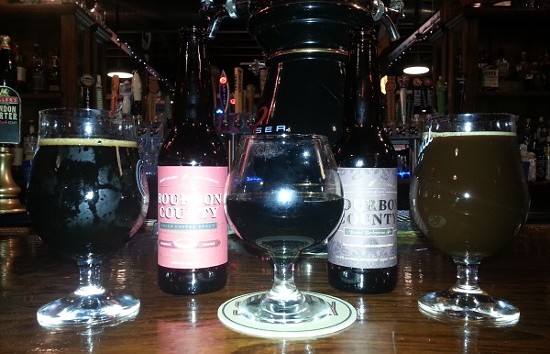 Unfortunately for St. Louis beer lovers, we received a little less Bourbon County Stout than the previous year -- though still more than we did in 2011. Armed with this knowledge, local Bourbon County hunters started early on Black Friday. (The brewery worked closely with their wholesaler network to ensure that most retailers nationwide held back the beer until then.)

At just after 7 a.m., these hunters began tweeting about their finds at local Schnucks stores. They continued sharing information via Twitter and the STLHops.com forum throughout the day. Most stores enforced some sort of limit on the amount of beer a person could buy, so some dedicated souls stopped at as many as six stores. In the end, most people's persistence was rewarded with a little of the regular and at least one of the variants. A few ended up with a lot of all three.

These hunters' intentions varied. Some want to keep a few bottles in order to age the beer and see how it develops over time. Goose Island labels proclaim that the beer will develop in the bottle for up to five years. Others procured the beer for friends that could not go out on a weekday to chase beer. Still others will use it for beer trades with people across the country. More than a few bottles will also show up at area bottle shares, like the one that occurred before Abraxas Day last month. St. Louis beer geeks generally like to ensure that their friends get to enjoy these rare releases.

So after all this hype, does the beer live up to it? Gut Check tried each of the three available versions and the answer is a resounding yes. The regular Bourbon County Stout was a beautiful marriage of flavors -- bourbon, toasty malt, chocolate and dark fruits, just to name a few. The barleywine tasted of brown sugar and vanilla with a hint of bourbon. The standout of the three, though, was the coffee variant. The bright coffee flavor amps up the chocolate and dark fruit notes of the original and balances well with the bourbon flavor.