La Patisserie Chouquette's Turducken Croissant is a Thing of Beauty

In case you couldn't tell, we kind of love Thanksgiving. It is an entire holiday celebrating food, after all (or being thankful, whatever). It's less than a week away: Bakeries around town are taking orders for pies and other goodies, and it's almost time for the delivery of those Thanksgiving turkeys. However, for one day only, Simone Faure at La Patisserie Chouquette (1626 Tower Grove Avenue; 314-932-7935) is combining your favorite Turkey Day foods into one yummy, warm pastry: the turducken croissant.

See also: Schlafly Tells Us What Beer to Drink on Thanksgiving -- Before, During and After Dinner

Faure decided to make the croissant after some prodding from her friend Christy Augustin at Pint Size Bakery. "Whenever she sees something crazy that she wants but she doesn't want to make, she sends it to me," Faure says. Augustin sent her a link to the famous Thanksgiving croissant at Momofuku Milk Bar in New York. 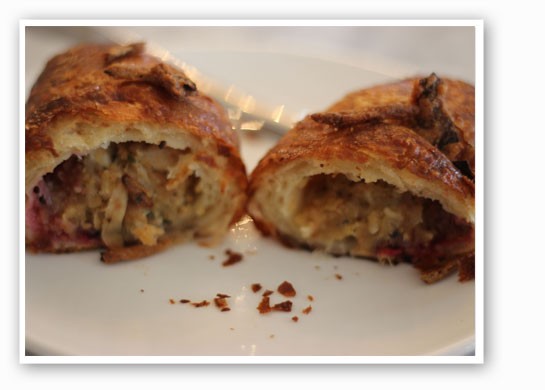 "I thought it was interesting, but I wanted to do something more like the Thanksgiving I had at home in Louisiana," she says. " The turducken, of course, was always on the table." Faure says she got so excited she had to eliminate some ingredients because the croissant was getting too stuffed.

"I wanted to put everything in, like sweet potatoes. But that doesn't even make sense!" Faure narrowed it down to bacon cornbread stuffing, turkey, duck, chicken, cranberry sauce, gravy and fried onions. "It's as much as will go into a croissant without killing someone," Faure laughs.

She left us to eat our Thanksgiving miracle, which was warm, flaky and buttery. The meat didn't overwhelm, but rather it blended nicely with the stuffing (and the pastry). Every once in a while, there was a bite of sweet cranberry sauce (we have a feeling this isn't the kind that comes in a can) to balance things out. Oh, and did we mention a side of thick gravy comes as a dipping sauce? Needless to say, by the time Faure came back, the croissant was long gone. Oops.

The turducken croissant will only be available Saturday, November 23, starting at 9 a.m. They're $7 each with the gravy side. Faure will be baking turducken croissants throughout the day, but she anticipates selling out. With a forecast of inclement weather, though, she says she may save some dough for Sunday. If we were you, we wouldn't take the chance.

It won't be available next week for the actual holiday because Faure and pastry chef Patrick Devine will be too busy preparing Chouquette's Thanksgiving and Hanukkah orders. "I'm trying to come up with Hanukkah croissant," Faure says. "It's rare that a bakery is doing both, but we do because my background is kosher baking." For the record, you can order fruit-filled challah, too.