Schlafly Eyeing Chicago? Not So Fast 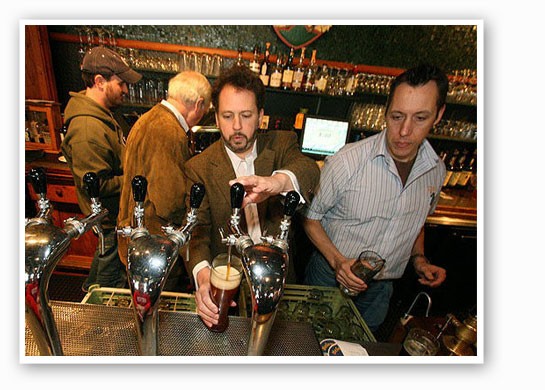 Schlafly fans (including us) were all atwitter this week following reports that co-founder Dan Kopman was scouting locations in Chicago. While Schlafly is sold in Illinois (and most of the states that border Missouri), you can't get beers from our largest craft brewery in the Windy City.

See also: Schlafly Tells Us What Beer to Drink on Thanksgiving -- Before, During and After Dinner

Luckily, Kopman set the story straight for us on Schlafly's expansion plans. Yes, he's in Chicago this week -- but don't get too excited.

"It's more of thinking about how to market and sell Schlafly beer in what is a very, very crowded market," Kopman says, pointing out that expansion to Chicago would more than double Schlafly's current distribution.

"Our problem is, we don't necessarily have the capacity for that right now. If we achieve what I think would be our expectations, we'd struggle with supplying certian beer styles," he says. "It's hard for us to make more, for example, Pumpkin Ale, or some of the big, special-release IPAs -- either getting enough hops or having the capacity. It's another part of the adventure."

Kopman says Schlafly's priority now is a third location in St. Louis; Kopman and Co. are looking for a place to build a new production brewery. He also maintains that growing brewer-partner relationships in hubs like Nashville, Iowa City and Wisconsin are what the production people are working on right now "99 percent of the time."

After 21 years, it's the biggest locally owned brewery in the state, thanks to the recent sale of Boulevard in Kansas City. Don't worry, though -- Schlafly isn't getting too big for its britches. According to the Brewers' Association, anything producing under 6 million barrels a year is considered "craft beer"; Kopman says Schlafly puts out 55,000.

"Some people would define 'craft' by the style of the beer; others do it by size. I think it's a combination of both: what you make, how you make it and your size," he says. Plus, any outpost in Chicago would put the same care in its beers with an on-site pilot brewery, small tap room and retail space.

"The idea of having a storefront up there is appealing to me. From a marketing standpoint, it allows us to connect directly with consumers and engage with them about our beers. That's what I like about it: the idea," Kopman says.

Unfortunately for you Chicagoans, though, there's absolutely no timeline for the upward expansion. It will have the be the right place, the right time and the right opportunity.

"It's a big decision for us, so we don't mind taking our time at thinking it through. We'll do it when it feels right," he says. "We've still gotta get all these beers released before the end of the year, so it's never a dull moment."