Blueberry Hill Honors the Gettysburg Address With a Gettysburger (What Else?) 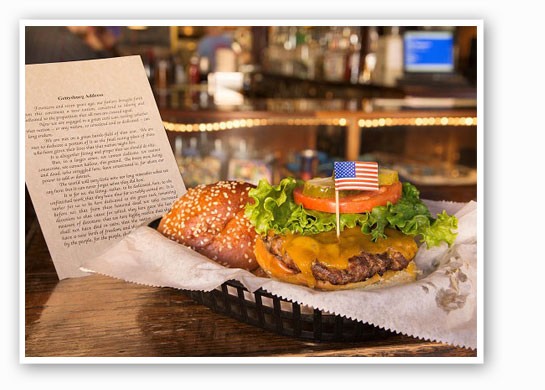 Four score and seven years ago, our fathers brought forth on this continent a new cheeseburger. Wait, what? Actually, seven score and ten years ago (a.k.a. 150 years), Abraham Lincoln made his famous speech on the site of the Battle of Gettysburg.

The speech has since taken on a life of its own, and to commemorate its sesquicentennial, Blueberry Hill (6504 Delmar Boulevard, University City; 314-727-4444) owner Joe Edwards is offering up the "Gettysburger" today with a little slice of history.

"It's the 150th anniversary of that great speech," Edwards explains, "and there's just something fun about saying 'Gettysburger.'"

The "Gettysburger" is really just one of Blueberry Hill's famous cheeseburgers, but better: The first 150 orders come with a tiny American flag toothpick in the patty and a copy of the speech as well as its history.

"I think its fascinating that when it was delivered, it wasn't even the main speech," Edwards says, referring to the two-hour oration by Edward Everett. "This very short, concise speech that Lincoln crafted was kind of ignored at the time, and then it became one of the most -- if not the most -- famous speech in our country's history. It's just one heck of a speech. Sometimes presidents and other people go on and on, and Lincoln didn't. He just crafted a brilliant one."

Edwards also has a statue of Lincoln that he's putting up on the bar at Blueberry Hill; he got it years ago at a toy store. "It's my way of having a little fun in life," he says.

"Enjoy Blueberry Hill burgers and enjoy the Gettysburg Address again," Edwards says. "Many of us saw it in grade school and haven't seen it since then. He was a great president, and it was pivotal in race relations and unification in the United States. We're still trying to keep it together, but we will."

The "Gettysburger" is available at Blueberry Hill today, November 19, only!