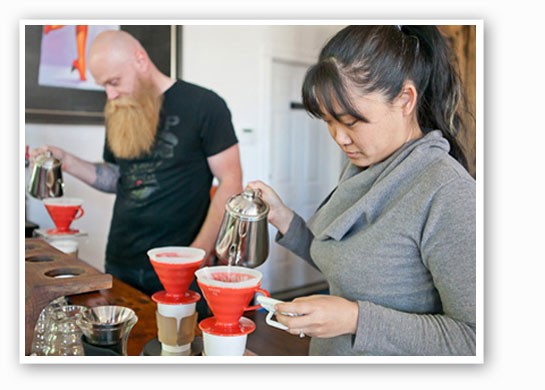 "When we pair with people, we want people who are thoughtful and set the high-water mark for what they're doing," Sump owner Scott Carey tells Gut Check. "We hope and we feel we're doing something special with coffee, and they are with their vegan cuisine."

Sump's menu will be pared down and streamlined, while Lulu's created a special dish just for the pop-up: banana walnut French toast. Carey is spotlighting a Kenya coffee with a "red, jam-y note to it" that will play off the French toast's flavors.

Sump will also be using a new machine called the Steampunk to brew coffee -- it's the first one in Missouri. It's an "immersive brewing" process, similar to French press, but cleaner. "The body's a little fuller," Carey says.

He'll be offering two coffees side-by-side as a flight, six ounces each, instead of the usual eleven-ounce carafe. There will also be espresso and one brew available as a pour-over.

"It's a nice way to introduce people who are loyal to them -- or loyal to us -- to each other and hopefully broaden our horizons and those customer bases," Carey says.

Lulu's will be parked out front, and the back patio of Sump will be open with a fire, weather permitting. Prices will range from around $4.50 for coffees and $8.50 for food.

"Because it's a pop-up, there's always something that comes up that you just can't account for," Carey says. "That's what makes it fun, the note of unpredictability."