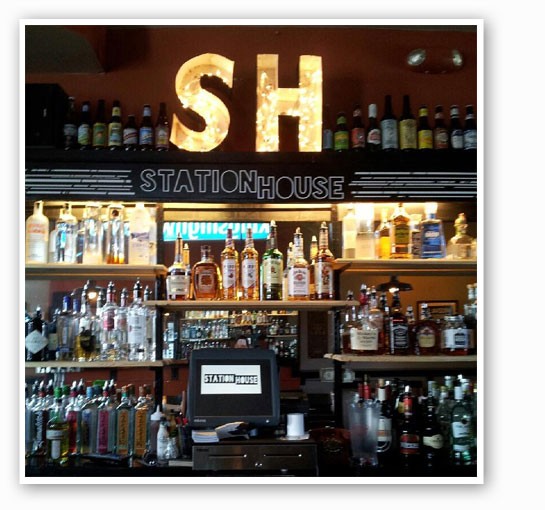 "We've been doing most of our promotion via social media," Kombrink tells Gut Check. "It's going great. We're getting a really good response -- spreading slowly by word of mouth."

He calls it an "urban industrial bar," which mostly refers to the space. It's an old house that was converted into a bar a few decades back, and really is a hop, skip and a jump from the railroad tracks.

"It's a real industrial setting near Grand and Chouteau, and we were told that it was a spot that people would stop in after getting off the train," Kombrink says. "We thought we'd just run with that idea."

Kombrink and Jackson have been friends for a long time, and although they come from different backgrounds (finance and contracting, respectively), they thought they would make a good partnership. It's been a long-time dream of Jackson's to own and operate his own bar, and Kombrink was happy to sign on as partner.

There is a limited menu of things like sandwiches and kale salad, but the real focus is local craft beer. Kombrink says it's one of two places in town with brews from Alpha Brewing Company. Everything on tap is from local breweries like Schlafly, 4 Hands and Urban Chestnut. The plan is to switch out the taps every two weeks or so. It will also have locally made liqueurs like Big O.

"We're doing the local thing -- along with everybody else -- but more than anything, its very comfortable. That's what keeps people coming back," Kombrink says. "It's not a place that's packed with college kids or old guys sitting at the bar hitting on a young waitress."

It is a tad hipster, though -- there's a record player upstairs with vinyls you can play (or bring your own records). There's also a typewriter upon which you can type notes and hang them on the wall. "It kind of has a retro and vintage feel to it, but I think it's almost more like hanging out at somebody's house," Kombrink says.

The grand opening is Saturday, November 16, from 6 p.m. to 1:30 a.m. and will feature DJs, a photo booth, on-site T-shirt printing, a cocktail party from Big O, and, of course, local beer. Check out Station House's Facebook page for more information.