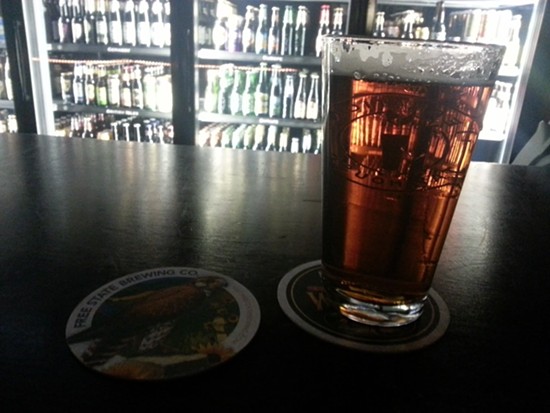 Beer fans in St. Louis have a few new options this week as Free State Brewing moves into our market and Shelton Brothers Importers return to Missouri after an almost two-year absence.

On Tuesday, Lawrence, Kansas-based Free State Brewing Company arrived in area bars and stores. Free State opened up in 1989 as the first legal brewery in Kansas in more than a century. On the eve of its 25th anniversary, Free State expanded its brewing capacity with the goal of increasing its presence across Missouri (it has been available in Kansas City area for some time) and other regions. Gut Check recently spoke with Free State founder and owner Chuck Magerl, who professed his excitement to join in the camaraderie of the St. Louis craft-beer scene and and insisted that two of the week's events were not planned to troll local Mizzou fans.

"We're college basketball fans," Magerl explained when asked about two KU vs. Duke watch parties planned for release week. "When [Free State's distributor] Major Brands came to us with the dates they wanted us in town," he continued, "we made a provision that we had to be at a place to watch the game."

Magerl went on to explain that St. Louis has become a craft-beer hot spot, and that Free State is excited to become a part of its expansion along with brewers such as Schlafly, with whom they've had a good relationship for many years.

Free State beers available in the area at launch include Ad Astra Ale (an amber), its oatmeal stout, and Winterfest -- a "winter" IPA, firmly in the third category of our unofficial winter-beer categories. Of the beers that Gut Check sampled recently, it's the hoppy Copperhead Pale Ale that really stands out.

In addition to Free State's arrival, beers from Shelton Brothers -- exclusive importers and distributors of many artisanal brands from around the world -- have once again become available in Missouri. Shelton Brothers' beers have been missing from Missouri since early 2012 when it had a falling out with its local distributor. Last month it finalized their plans to form a Missouri-based company, called Shelton Brothers Missouri, to distribute its portfolio, so now you can look forward to beers from highly sought-after brands such as Crooked Stave, Cantillon and Mikkeller.