Happy Hump Day! Here's the cocktail that will get you through to Friday. 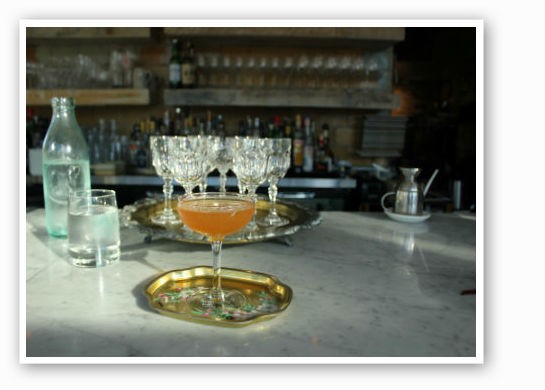 Each month a new menu appears, inspired by an overarching theme. This month? "The Fall," which sounds pedestrian given the obvious seasonal implications, but what we really have here is a double entendre. "Fall" actually references "a fall from grace." And what better reason to drink than personal failure and disappointment? So we went all transcendental and ordered up an "Emerson."

It makes sense that John Fausz, bar manager at Olio, is an English major, and an extremely friendly one at that. While making the "Emerson," he talks about the man behind the drink, and it's pretty fascinating.

Ralph Waldo Emerson was a philosophic and literary giant in the early 19th century, and a key figure in the transcendental movement -- sort of a back-to-nature type of deal. But by the end of his life, Emerson was a shell of his former self. He suffered from aphasia -- loss of memory and the ability to speak, effectively robbing him of his greatness. And then his house burned down, which sucked. But hey, now we can drink in his honor, so there's that.

The "Emerson" is a blend of gin, lime, maraschino and sweet vermouth. Fausz describes it as a "bright drink, but with a nice fall flavor," and modestly explains how the lime juice works in conjunction with the sweet vermouth. Of course you could always read the notes that accompany each drink, written by Fausz, which give a more accurate portrayal: The Emerson "possesses a subtle yet compelling elegance, a rational balance, and a case for simplicity in the face of modernity. It could make you forget it all."

The drink's warm orange glow is lit up beautifully by the big open windows, the maraschino and sweet vermouth add a great counterpunch to the gin, and the lime contributes some citrus as a reminder of summer.

If you're feeling a bit overwhelmed by the intellectual inspiration, have no fear -- Olio is casual, laid-back and extremely welcoming. The menu might be exceptional, but it doesn't necessarily take itself too seriously. To wit, there's the "Monkey Gland," which tells the story of a Russian scientist who attempted to graph monkey glands on men who had lost their, ahem, vigor (pre-Viagra days). The whole experiment ended poorly, but your experience at Olio is sure to be quite the opposite.

How to make the "Emerson" at home.