About four years ago, Dan Drake started making crazy pancakes. He's worked at the Courtesy Diner (3155 South Kingshighway; 314-776-9059) for almost five years, but is achieving that peculiar thing known as Reddit fame because of some old photos a friend took of him during a slow shift. Drake is actually a musician -- his band is called the Psychedelic Psychonauts -- but he's embracing his breakfast break, as it were.

See also: The Five Best Places in St. Louis to Have a Cup of Coffee

"I'll try [to make] anything," Drake tells Gut Check from behind the counter at Courtesy Diner. "I can draw, so if I can draw it, I can probably make it in pancakes."

Drake has been blowing up on the social networking site Reddit -- someone posted a triptych of photos of him on the job that a friend posted on Facebook a while ago. Since then, he's gotten over 500 likes on his "Dr. Dan the Pancake Man" Facebook page and recognition for what Diner regulars were already praising.

As we sit at the counter sipping coffee, the girl next to us giddly shows us a photo of the cat-shaped pancakes she has just eaten. A few minutes later, a young man and woman approach the front door excitedly, motioning towards Drake. "I have no idea who these people are," Drake says, laughing.

"We saw you on Reddit and we just had to come!" the woman says giddily before they sit down. Curiously, they don't order pancakes, but Drake sends them over a treat anyways. The waitress herself is almost giddy as she brings it over with their order. 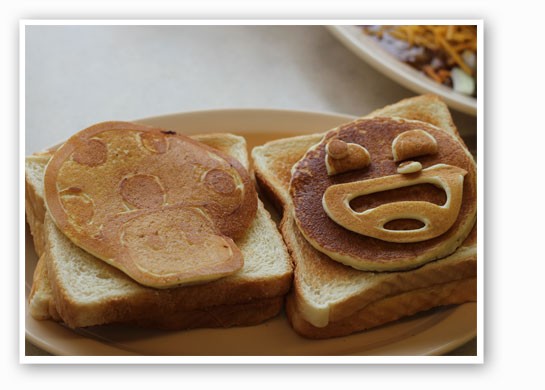 "Hurry and take a picture, before I eat it!" the woman says. "I'm so excited right now!"

Drake uses the nickname "Dr. Dan" for Psychedelic Psychonauts, but he says it was a random nickname in high school, at the Gateway Institute of Technology. It didn't really catch on until the girl who unceremoniously bestowed it upon him started working at Courtesy Diner, too -- their boss liked it, and it stuck.

The first time Drake made his fanciful flapjacks was during a slow shift -- he decided he would make the craziest, goofiest pancakes for the next person who came in and ordered them. As fate would have it, it was a regular named Chad, whom Drake says is "not exactly the most approachable guy in the world."

"I tell myself that, and then walks in this tatted up, gold-toothed guy. So I made them and set them in front of him. He just stared at me," Drake says. "Then he tipped me $15. So I thought, maybe this is a good idea."

Three or four uniformed waitresses flit around Drake as he works: the pancakes, eggs, toast, burgers, whatever. They clearly enjoy his goofy take on the job. "His talent is endless," one winks. He was even allowed to film a music video for the Psychedelic Psychonauts there as he worked a graveyard shift, aptly titled "Graveyard Blues."

Drake says his diner gig is just a day job until he can make a living from his music, but he doesn't mind it. His burgeoning pancake celebrity even earned him a spot at Raw Artists at 2720 Cherokee, but it didn't go exactly as planned. 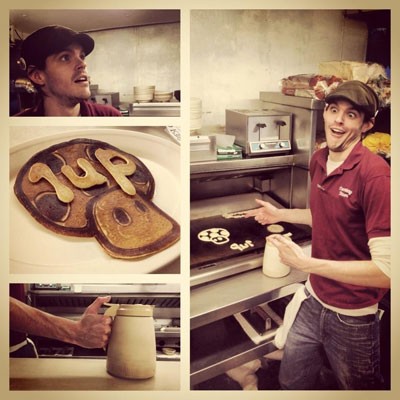 "I tried to rap while cooking pancakes but I knocked out all the power," Drake admits. Hey, at least he's got ample opportunity to practice his art at Courtesy Diner.

"If you make a penis-shaped pancake for a group of really drunk gay men, they will give you a $25 tip," he says. We'll be sure to remember that.

You can check out the original Reddit threads here and here.