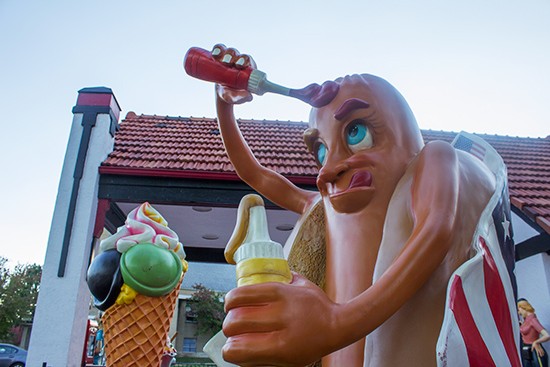 A giant cartoonish hot dog draped in an American flag dousing itself with condiments might not bring the kid out in you, but it certainly makes for some rousing conversation -- at least, that's what the Filling Station's (5323 South Kingshighway) co-owner Dan Fitzhenry hopes it will do. Life-size statues of caricatured characters and giant ice cream cones line all sides of the remarkable retro-themed building and there's even more inside.

Fitzhenry first spotted that vintage frankfurter statue at an antique mall with his wife and co-owner, Dale Fitzhenry. Since that day, the couple has traveled far and wide across the US to acquire their mini museum of nostalgic American centerpieces, a veritable "Where's Waldo" of the Fonz and other familiar faces from '50s pop culture. Vintage gas station memorabilia ties the theme together. 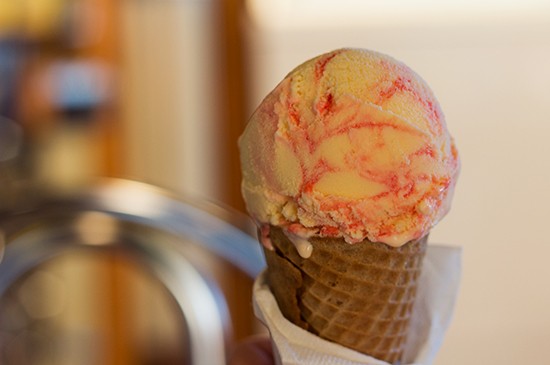 The building that has housed the Filling Station since August 17 started off as a gas stop between the '20s and '50s. These days, it serves frozen treats and a few hot eats. Dan Fitzhenry says he used to pass the building nearly every day as a teenager while attending Bishop DuBourg High School down the street. After thirty years of driving a tractor trailer, he decided to purchase the space and settle down with his own business.

"For years, I parked my tractor trailer behind Hooters in South County," he says. "I was forever seeing people taking their kids and there thought there ought to be a better place for them to go. That's when my son came up with the idea of opening an ice cream store called Udders." 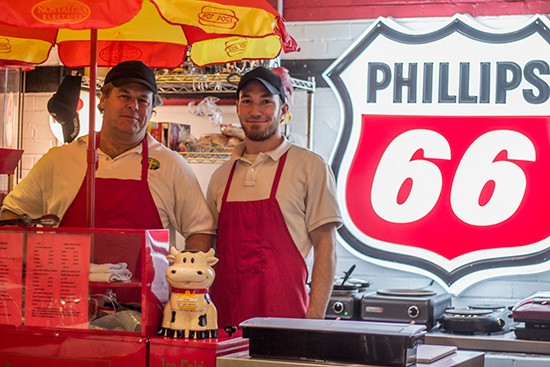 Fitzhenry envisions the Filling Station as a mini-mall of sorts. At his Udders stand, he serves several flavors of Central Dairy ice cream from Jefferson City by the scoop or in shakes. Udders also offers ten flavors of Rio-syrup flavored snow cones. Across the way, a stand dubbed Dandy Dogs offers several varieties of G&W Meat & Bavarian Style Sausage Company products between buns -- bratwurst, knockwurst or weisswurst, anyone?

He also hopes to host family-friendly movies and concerts in a grassy space he calls Movies on the Lawn sometime this upcoming spring or summer.

Fitzhenry says he hasn't gotten social media down quite yet, so don't try to find information on the Filling Station online or even try to track down a phone number. Instead, just stop in the next time you pass this kitsch-packed place on Kingshighway for a special treat (note: cash only). The Filling Station's current hours are Tuesday through Thursday from 10 a.m. to 9 p.m., Friday and Saturday from 10 a.m. to 10 p.m. and Sunday from 3 to 9 p.m. 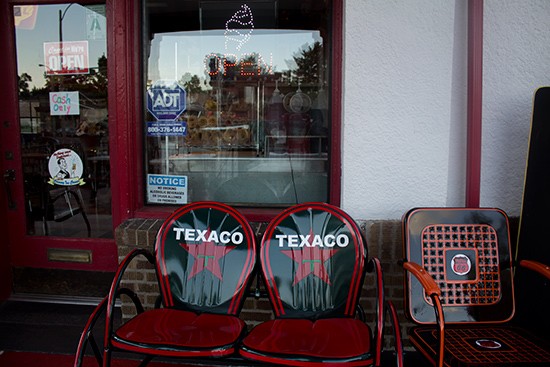 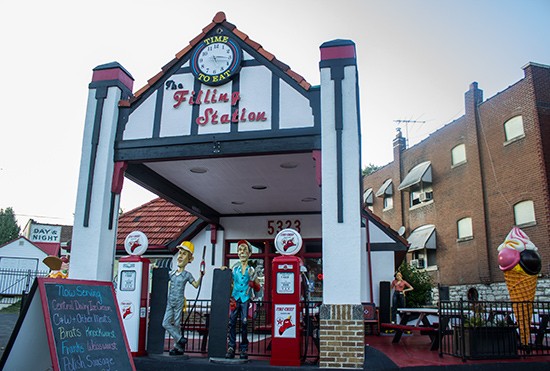