Happy Hump Day! Here's the cocktail that will get you through to Friday.

When first walking into Tripel Brasserie (1801 Park Avenue; 314-678-7787), you most likely will first be drawn to the bar and the long stretch of impressive Belgian beer taps, which is understandable. But your next move should be the cocktail menu where co-owner and bar manager Terry Oliver has brought together a pretty stellar group of inimitable drinks. Exhibit A: The "Smoke Wagon." We knew things were about to get serious when barkeep Andrew Parker grabbed some bourbon and a device called the "Smoking Gun," so we sat back and watched the show.

Though having only recently opened its door, Tripel's cocktail menu has already evolved and expanded, a trend Oliver expects to continue. Though not a long list, each presented drink is complex and obviously a product of in-house experimentation. The "Smoke Wagon" embodies such a notion fully, using bourbon, amaro, bitters and chocolate bitters, plus more sweetness with maple syrup and orange zest. 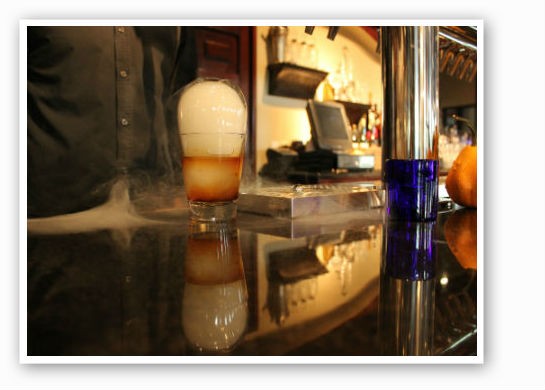 While Parker does the concocting, Oliver explains how best to use the Smoking Gun, Tripel's secret weapon of sorts. It's basically this genius device that is catching on among expert drink-makers that allows flavorful smoke to be infused into your drink. For the "Smoke Wagon," wafts of French plum tea leaves are shot into a glass and then quickly covered and trapped. Oliver advises, "Let it sit and take on the smoke, then pull the glass straight up to gauge the level of smoke." You can then either return the top covering glass to let it stew further, or go ahead and drink to your heart's content.

As the curls of smoke dramatically trail away from our glass, we take our first sip. Inhaling an aroma of smoky bourbon and syrup, the drink itself is near perfect. Oliver describes what we're tasting as a cross between a manhattan and an old fashioned, and that sounds about right to us; it's warm and full of heavy, rich flavors. Though we'd add that saccharine tones are present in each sip (thanks to the syrup and chocolate bitters), which cut through the bourbon, balancing things out nicely. Another impressive touch was the ice. Yes, ice can be interesting and even quite important (bad water leads to bad ice, which then melts and ruins the drink). In this case, quality water is used to fill a balloon, making a solid ball of ice that slips into the glass and, unlike smaller cubes, holds together and puts off melting and dilution.

Again, there's nothing wrong with tasting your way through Tripel's Belgian beer list, but it would be a crime to not also visit the cocktail menu along the way, where you're sure to find crafty drinks to fit your fancy. Plus, there's no rule against ordering both a pint and a cocktail -- that just seems efficient.

After the jump, find out how to make the "Smoke Wagon" at home.