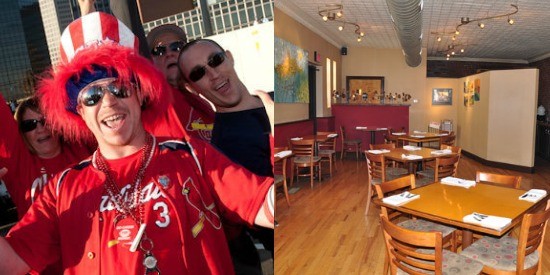 We're right in the middle of the World Series, and after last night's loss, we aren't feeling too great. Having our home team in the big game is big business for many St. Louis sports bars, but unfortunately the opposite can be true for small, local restaurants who do not have televisions.

The owners of Stellina (3342 Watson Road; 314-256-1600) have felt this negative impact badly enough that they included a good-natured "rant" in their weekly newsletter about the problem.

"From Sydney Street to down the street and everywhere in between, independent restaurants everywhere are struggling," it read. "The truth is, if you aren't located within two blocks of the stadium, or have 400 TV's in your place, you are most likely looking at an empty restaurant."

"It hurts business, but it's also something we have to deal with once in a while. We're a baseball town, I get it," says Jamey Tochtrop, chef at Stellina. "We're not mad -- there isn't a real great solution."

Stellina, like many small, cozy restaurants in town, is the kind of place diners visit to get away from the television, but that's rough when an entire city is glued to the games. Tochtrop says they've tried to adjust by cutting staff hours and not purchasing as much food, but there's not much else he can do.

"People have said to do game-day specials, but that doesn't do much from our perspective," Tochtrop says. "We just have to accept it."

We heard similar concerns over at Local Harvest Cafe & Grocery (3137 Morganford Road; 314-772-8815), though the games have been helping the grocery part because people are picking stuff up to go, says packaged-foods chef Dan Johanning.

"It's just one of those things, especially with St. Louis being such a special place when it comes to Cardinals baseball," says Johanning. "Even people that may not be huge Cards fans like to get into the camaraderie. It's a very community-oriented thing."

As with Stellina, Johanning says any other time of the year, it'd be a hindrance to have televisions in the restaurant.

So, St. Louis servers and restaurant managers, have you seen business slow down as people flock to sports bars to watch our beloved Cards? Let us know in the comments.

After the jump, read the full rant from Stellina's newsletter.

Oh the Cardinals...... We really want to love them. They are doing great this post season, right? They are almost certain to make it to the main stage, the big game, the series, right? Well, as much as we love our home team and always want to see them doing well, especially in the post season, it absolutely kills local restaurant business. We aren't mad (well, maybe a little), we want them to win the final game they play all year. That's what sports are all about. From Sydney Street to down the street and everywhere in between, independent restaurants everywhere are struggling. The truth is, if you aren't located within two blocks of the stadium, or have 400 TV's in your place, you are most likely looking at an empty restaurant. We understand you want to see the game (Friday and Saturday night, really MLB?), and we are not about to bring in TV's for the series. We just ask that you be mindful of those of us that work hard every single day to maintain a great St. Louis restaurant scene. Even if it is simply an extra visit for lunch (when the Cards aren't playing...) we understand, and even if it isn't at Stellina, we just encourage you to help support the local scene that strives so diligently to make St. Louis the great eating city that it is. (end of rant)