Citygarden's Beautiful Restaurant is Vacant -- Could Shake Shack Swoop In? 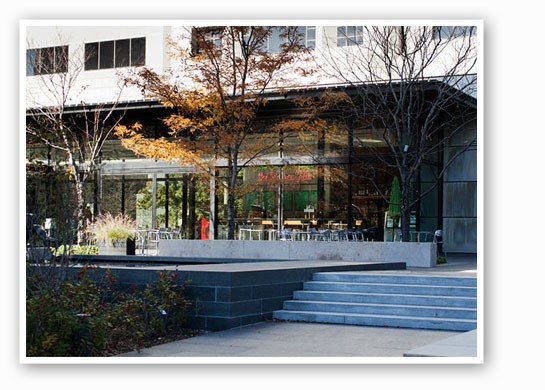 After Joe's Chili Bowl (808 Chestnut Street; 314-241-7070) closes next week, there will be, yet again, a vacancy at the stunning Citygarden restaurant. We got to thinking -- wouldn't it be the perfect spot for a St. Louis outpost of Shake Shack?

Founder Danny Meyer is a St. Louis native, after all, and the idea has been discussed before, when when the Terrace at Citygarden closed in 2011.

"I think if you love where you came from as I do St. Louis, you always have a little thing in the back of your mind that says, 'Could I ever come home?'" Meyer told the Beacon at the time. "If I were to come to St. Louis for any reason, I would absolutely want to at least see [the building.]"

So, what about this time around?

As we reported yesterday, Joe's Chili Bowl will be closed by the end of the month. Co-owner Kim Tucci also tells us hot dogs, chili and the like just wasn't the right concept for a place like Citygarden.

"The space needs something different than regular lunch food, because there's so many places town there to eat," she says. "We tried it and it just wasn't the right concept. That's not to say we wouldn't do it somewhere else down the road, but not now."

But not so fast -- Shake Shack seems to have a golden touch. Couldn't they bring the kind of crowds that wrap around the block in Central Park to Citygarden?

So, we made a few inquiries. And the answer sucks.

@Lussenpop @dhmeyer No STL plans for the moment, but your hometown is close to our hearts.

"There are no plans for anything in St. Louis," confirms Edwin Bragg, Shake Shack's director of marketing and communication. "Never say never, but there's nothing in the works."

LAME. We'll hold a candle for you Shake Shack. Someday, you will be ours.