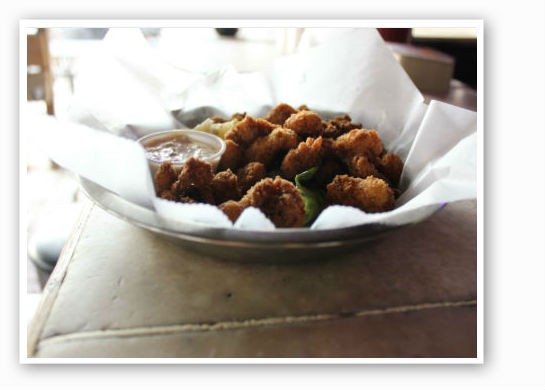 On the History Channel, which long ago lost all legitimacy, there's a popular show that revolves around people living in swamps down on the bayou, who then primarily hunt alligators in said swamps. Usually these "swamp people" are colorful characters who speak with nearly indecipherable yet endearing Cajun accents and are often missing several teeth. Needless to say, the show is wildly entertaining (nearly every episode leads you to believe that by show's end, someone will be eaten by a big ole gator, though, so far, no such luck). But all of this is really just a way of explaining that alligators are a hot commodity -- not just as purses and boots, but as a source of food, especially in Cajun cuisine.

While St. Louis might have its French antecedents, Cajun in our fair city is not overly abundant. Still, we have our sources, and at the iconic Broadway Oyster Bar (736 South Broadway; 314-621-8811), you can in fact find yourself some gator. Recently, we did just that.

Broadway Oyster Bar's menu is full of Cajun dishes: gumbo, crawfish etoufee and, of course, oysters. But we steered off the beaten track and went with the fried alligator, served as an appetizer. Our server, Megan Metheny, explained that alligator "has a different texture; it's thick but still really tender." The meat (which is actually taken from the tail section) is marinated to take out some of the toughness, hand-breaded in a housemade cornflower mixture and fried until golden brown.

The gator is served in bite-size morsels along with housemade tartar sauce, and we threw in some hot sauce as well. Upon first bite, it's clear that some pepper and spice is used liberally the breading, but beyond the initial kick, the gator itself is a bit stringy and tough. Since it's a tired cliché to make the easy comparison to chicken, we will more accurately point you toward fried chicken gizzards (which need to be featured in an upcoming Eat This!?), which are likewise gristly and chewy but still flavorful.

The gator is very much helped by Broadway Oyster Bar's excellent Cajun seasoning, but nonetheless, the meat is tender and delectable. We wolfed down every bite. Later gator.