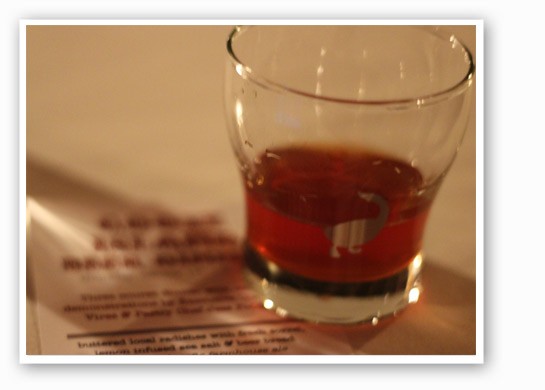 Gut Check loves knocking back a few beers, but we hadn't really considered saving any to cook with. White wine sauce? No problem. Beer bread, though? We're going to need some guidance.

Luckily, our 2013 Best Chef winner Cassy Vires teamed up with Goose Island during its St. Louis Migration Invasion last week to teach us about beer pairings and beer as an ingredient at her restaurant, Table (1821 Cherokee Street; 314-449-1888).

Vires walked us through each course while cooking before Goose Island's Patti Mandel explained the beer from the Chicago-based brewery. The first bite was beer bread plus buttered local radishes with wild greens and lemon-infused sea salt. The beer bread was made with the Sofie Farmhouse Ale, a champagne-colored ale with some citrus notes.

Next was an awesomely tender braised pork belly with Roman gnocchi (a large, soft polenta-based dumpling) with crushed hazelnuts and a balsamic beer reduction. The reduction was made with Goose Island's Matilda Belgian Strong Ale, which we had a taste of on its own, too. It's a bit darker than the Sofie and a bit fruity.

For dessert, Vires' much-admired pastry chef Jess Paddock created a raspberry-ale panna cotta with local raspberry puree. There was Lolita American Wild ale in both the panna cotta and the puree. The Lolita is the darkest of the three beers, but with a slightly pink hue, due to its own raspberry aging.

Of course, it's a cinch to watch Vires and Paddock cook this stuff up like it's no big deal, but they've given us (and you) the opportunity to try it at home. Here's how to replicate this sumptuous beer feast at home: