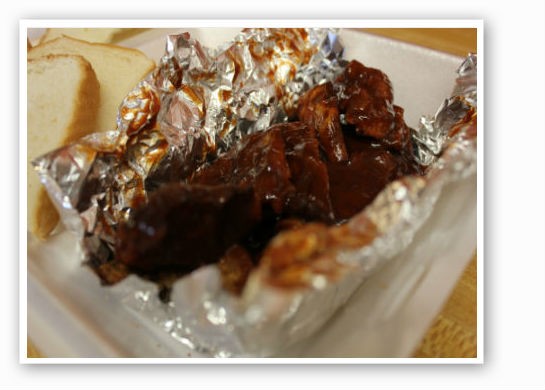 On the north side, at the corner of Mullanphy Street and Broadway, trails of smoke can be seen billowing out behind Smoki O's (1545 North Broadway; 314-621-8180) known as one of the best barbecue joints in the city. A family operation, Smoki O's has been pulling pork and slicing brisket since 1997, receiving many accolades along the way (including from the Travel Channel's Andrew Zimmern) and devoted fans along the way.

On the day we visited, the St. Louis Police Department put in a massive take-out order, which, understandably, garnered the immediate attention of the staff. And while scouring the menu, our eyes were drawn to the ribs, the pork, the chicken -- it all sounded delicious. But we were there for one reason and one reason only: the snoot. That's right, snoot, or pig snout. It's considered a fine delicacy when cooked properly, and lucky for us, Smoki O's nose (sorry, couldn't resist) a thing or two about snoot.

To be precise, snoot, which is said to have originated in St. Louis (we'll claim it!), is taken from the nose and cheeks of a pig -- a less fatty, tougher cut that therefore needs special attention. It's grilled (not smoked) for hours and hours until crispy. Co-owner Otis Walker guards the family secret of Smoki O's method of preparation, but says cooking snoot "is definitely different."

Before digging in, we were first instructed to try snoot on its own, without sauce. Described as "a combination of pork rind and bacon," plain old snoot is salty, crispy and crackly. If you've never had it, the dry toughness might at first be surprising given the fact that barbecue is supposed to be tender and juicy. But after a few bites, the grilled-in flavors and seasoning start to stand out.

That said, snoot smothered in barbecue sauce is way better. Smoki O's sauce is, again, a family secret and typifies St. Louis style -- sweet and tomato-based. It adds another layer of sweet and the salty. The snoot is wrapped in tinfoil, served along with two slices of white bread and includes a side -- we chose mac & cheese, and it was pretty great. You can try to use a knife and fork, but trust us, such efforts will be unsuccessful, so just go to town with your fingers and use the bread to soak up the sauce.

Snoot isn't available in most barbecue restaurants; it's a specialty that requires a true understanding of pork. Give it a try -- you really can't claim a working knowledge of St. Louis barbecue until you do.