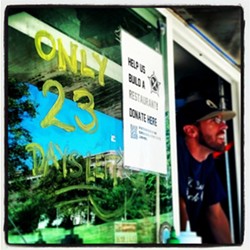 After two years, many accolades (including a Best Food Truck award from Riverfront Times) and a Diners, Drive-ins & Dives episode, the owners of Guerrilla Food Truck say they're ready to get off the truck and plant their feet firmly on the ground with a brick-and-mortar location.

"We've reached critical mass with what we can do with one truck," says co-owner Joel Crespo. "It just made sense. It was the only thing to do."

So, the owners have started an IndieGoGo campaign and are asking their fans to consider dropping a few bucks in their cap so they can build their dream restaurant. OK, maybe more than a few bucks: The goal is $115,000.

Crespo says it was clear to him that Guerrilla needed to expand, but buying another truck didn't make sense to him, especially because it already has to rent commercial kitchen space from other restaurants. And in a survey of their customers, Crespo says the stand-out response was people complaining that there wasn't a permanent location. With a more conventional location, Guerrilla will be able to offer its popular specials -- like the to-die-for "Iron Manok" fried chicken -- on a regular basis, and customers will always know where to find it.

The goal amount is a great deal of money, but Crespo says if GSF comes up short he'll simply downsize his dream accordingly. He also may seek bank loans to fill the gap. But if the goal is met, Crespo has very ambitious goals, like having whole roasted suckling pig on a spit regularly.

And going the crowd-sourcing route is also keeping with their very social-media heavy marketing strategy.

"There's a rapport we have with our fan base, and they can feel like they have a say and are interacting with us," he says. "We'd be able to maintain that rapport with our friends."

Check out the pitch video and donate at IndieGoGo here.