Side Project Brewing Unveils "The Origin" 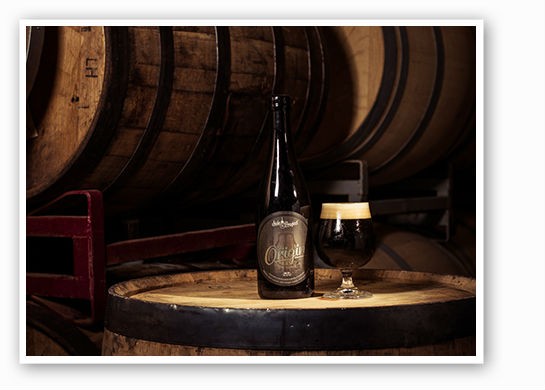 In the sixteen hours since he first set down his chair, more than 100 other beer lovers placed chairs behind his in the growing line for a bacchanalian celebration going down in the small courtyard just outside Perennial's front door. Like pilgrims in search of some holy artifact, they'd all come to see and, if lucky enough, taste the new beers from Side Project Brewing (8125 Michigan Avenue; 314-631-7300), the -- well -- side project of Perennial's head brewer, Cory King.

But it wasn't just your run-of-the-mill beer event that had men willing to spend the night sitting in a parking lot. The reason the serpentine line extended down the street was because everyone hoped to get their hands on a $25, 750 ml bottle of Side Project's first beer, "The Origin." It was the only chance they'd get.

See also: - Side Project Brewing Gives Us a Sneak Peek

Because he was the absolutely first person in line, Teramura would soon have his very own a bottle of the Origin, though he still had to wait till noon when the doors opened -- another four hours from when Gut Check arrived on the scene. In the interim, beer-obsessed attendees swapped bottles they'd brought with them and while everyone was ostensibly in competition, the general atmosphere was congenial.

"Everyone has been really cooperative and nice," said Teramura. "It's been a continual bottle share since...well, 2:30 yesterday."

As evidence, he pointed to the tables covered in empty bottles -- many of which special releases and rare beers opened and shared just for the occasion.

The crowd collectively buzzed about Side Project, which has now officially entered the craft-beer world. The method of production is unique, what the pros call a "gypsy brewery." Typically, gypsy brewers travel to established breweries to lease their equipment while using their own recipes. King's Side Project leases Perennial's space and equipment, but he is also the head brewer at Perennial. King will continue to churn out experimental brews like the barrel-aged Abraxas while simultaneously working on his own small-batch ales for Side Project that will age for extended periods in wine or spirits barrels, soaking up immense amounts of flavor. It's the best of both worlds.

The first taste of things to come at Side Project was the Origin, a blend of Imperial Stout, Black Oatwine and Baltic Porter aged in one Rittenhouse Rye barrel over twenty months, and registering in at a whopping 14.3 percent ABV. It was only available in a limited quantity, and, because of the complex recipe, will never be brewed again. Though everyone expected greatness, very few really knew what the thing would actually taste like.

The only exception was Teramura, who had already been given a sneak preview in the form of a few sips, his dedication rewarded at some point during the night. His takeaway: "Incredible. Luxurious is my term for it."

For those of us who did not wake up at 4 a.m. on Saturday (Gut Check arrived at 8 a.m., saw the line and quickly realized we had no shot), our chances of ever trying Origin are pretty slim -- the bottles quickly sold out, so you'll have to find some generous soul who possesses a bottle and is willing to share.

We asked Joe Hoffmann, first plate holder at Flying Saucer Beer Emporium St. Louis (900 Spruce Street; 314-932-1456) and the proud owner of one of those bottles to tell us what he thought of Origin. Here's what he wrote to us:

It's a big beer, pretty smooth...vanilla, chocolate, roast, barrel. It has a lot going on and not something to try and give tasting notes on after sampling other beers for the previous 7 hours...

I'm not really sure what people planned to do with their bottle. Since I got to drink it there and had small tastes previously, I will sit on my bottle a bit until I get together with friends back in KC so they can check it out. Some people definitely opened bottles that day. And then there are the special people that will use it as currency on the beer black market. There are probably equal amounts of all of those people out there.

The good news is that other Side Project beers will soon be available. The Saison du Fermier (a Chardonnay-barrel-fermented Saison) and the Brett Project #1 (fermented and aged in wine barrels) are both amazing beers. Better still, more is on the way.

"The overwhelming support for Side Project, for my passion to create these beers, far exceeded my expectations," said King.