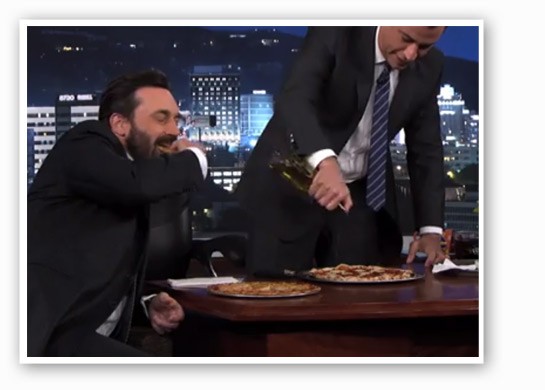 Hometown boy Jon Hamm -- fresh off his latest loss at this week's Emmy Awards -- stopped by Jimmy Kimmel Live! Wednesday to promote his new movie A Young Doctor's Notebook with Daniel Radcliffe and talk about how much he loves St. Louis.

"For those who don't know, you are from St. Louis," Kimmel said to Hamm during the segment. "There is a pizza place that I've been at odds with called Imo's Pizza in St. Louis. Now, it's a beloved chain in St. Louis and...the pizza by the way is terrible."

Whoa whoa whoa. Whoa. Luckily, Hamm was all over it.

This is not the first time Kimmel has talked smack about Imo's. He's already sparred with native daughter and former Office star Jenna Fischer over it. When comedian Judah Friedlander bought a St. Louis audience Imo's after his show, Kimmel asked Friedlander why he was punishing them.

"I get a lot of abuse from people in St. Louis when I make fun of their terrible, terrible pizza place," said Kimmel last night.

Naturally, he had to bring it up with Hamm, but this time he actually had Imo's delivered all the way to Los Angeles. Kimmel challenged Hamm to a taste test: Imo's versus a wood-fired pizza that Kimmel made himself. It was battle between "Imo's or Jim-o's."

Though this may have been the worst kind of ambush pizza journalism, the Mad Men star handled it with aplomb and stuck up for his hometown. Watch:

In case you missed it, Hamm dropped all kinds of pearls of wisdom about Imo's, St. Louis, and, if you get right down to it, about life itself:

(To which Kimmel replies, "Yes, they're disgusting also.")

On the next page: Watch GIFs of the drama and read the Twitter response from Imo's

The presentation of both pies -- one a delicious Imo's pizza shipped from St. Louis the previous day and frozen overnight to seal in its glorious flavor... and the other a pizza allegedly prepared by Jimmy Kimmel the previous night. Jimmy Kimmel Live personality Guillermo Rodriguez speedily delivers both pies, which are both cheese. Hamm later reminds Jimmy that Imo's pizza is cut into squares and that you "want to get the middle piece, because that has all the good stuff."

Hamm tries the Imo's pizza, exhaling a hearty "Oh yeah" after one delicious bite. We knew we loved you, Jon. "You can taste the Gateway Arch, you can taste eleven World Series victories."

Then Hamm tries "Jimo's" pie, dressed with Olive oil and basil from Kimmel's garden... Hamm takes a few bites, licks his handsome fingers and says, "Jimmy, this is delicious pie..."

"OH NO!", exclaims Kimmel. Some talk about toasted raviolis and feeding animals pizza ends the segment.

@davidjohns11 @Lussenpop We're still hoping he comes around on us.