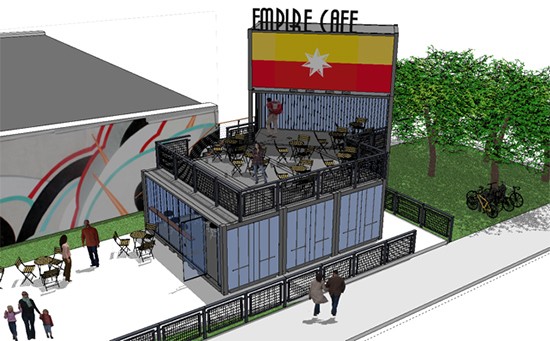 In the spring of 2014, a vacant lot at the corner of Cherokee Street and Texas Avenue is slated to become St. Louis' first international street-food-themed restaurant, Empire Cafe (2622 Cherokee Street). The project comes from area developer Jason Deem and chef Colleen Clawson (previously of Sidney Street Cafe, Great Restaurants Incorporated and Venice Cafe), who will serve as the restaurant's executive chef and general manager. The space has a strong emphasis on smart design, developed by Killeen Studio Architects, which has worked on hospitality projects including the Cheshire hotel and restaurant expansion, the Ballpark Hilton Club Lounge and La Vallesana restaurant renovation. 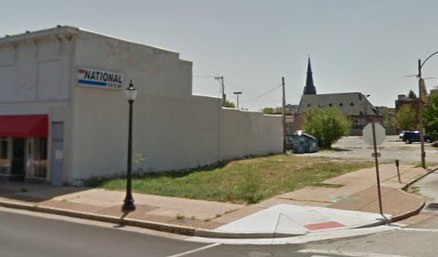 The cafe aims to serve as a community hub for the neighborhood with an elaborate outdoor mezzanine as well as an open rooftop patio. The small interior will have counter seating and stools for 12 to 20 individuals, while the exterior intends to hold up to 100 seats. Much of the building's structure will come from repurposed shipping containers that have made their way in from all over the world, keeping with the international theme.

Hours for the restaurant will eventually run from lunch until late night, serving alcohol until 1:30 a.m. Initially, though, Clawson hopes to open for breakfast service.

While developing the menu, Clawson says, that in addition to an emphasis on sustainability, seasonal availability and health consciousness, a main focus is ensuring that menu items are easily transportable and affordable.

"It'll be a rotating menu...It's going to be a more concept-driven thing as opposed to necessarily having the same menu items all the time," says Lawson. "I'm going to be drawing influences from all over the world: South Asian, African, South American, regional American and European."

Build out for Empire Cafe will begin in coming weeks. In the meantime, follow Empire Cafe on Facebook. More as we learn it.

Click through to see a few more artist renderings by Killeen Studio Architects.