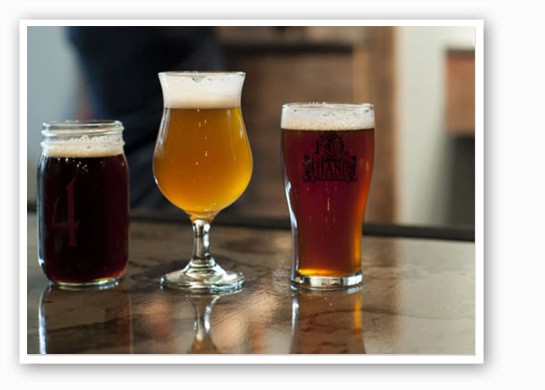 4 Hands Brewing Co. (1220 South Eight Street; 314-436-1559), one of the fastest-growing craft brewers in St. Louis, announced this week it will expand its brewing capacity by several thousand barrels. Gut Check talked to 4 Hands president Kevin Lemp to get the inside scoop.

"Right now we're trying to position ourselves to be ahead of the game, instead of always chasing the tail," he says.

4 Hands will install two new tanks in about two weeks that each have the capacity for 2,000 gallons of beer. Two more will be arriving in January, which brings total production to over 12,000 barrels (up from the current maximum of 7,000).

Lemp denies the expansion had anything to do with Urban Chestnut's's massive new location and 15,000-barrel projected output.

"This decision was solely based on us transitioning from 22-ounce to 12-ounce bottles. Volume will triple with the new 12-ounce four-pack," Lemp says. "We're not anticipating selling 12,000, necessarily, but the last thing we want to do is launch a new package and run out of stock."

4 Hands sold 66,531 gallons of beer in Missouri for the fiscal year that ended in June 2013, but that is sure to increase next year as it expands to new markets like Chicago on January 1. Lemp estimates that the current building's capacity is probably around 30,000 barrels, which leaves them open to up production as needed.

"That's always been our goal -- when we opened, we found a building that would support the growth we were looking for," he says.

4 Hands will offer its four core brews (Divided Sky Rye IPA, Reprise Centennial Red, Cast Iron Oatmeal Brown and the Single Speed Session), and ten to twelve seasonals. In addition, there will be two brand new additions to the 4 Hands family this fall: an APA called City of Dreams, which Lemp describes as "predominantly El Dorado hops with a nice apricot-y stone fruit nose to it" and a blonde saison called Cuvee Diable, which is a "sister beer" to 4 Hands Cuvee Ange. The Cuvee Diable is aged in cabernet barrels and tart cherries as well as a wild yeast strain.

Here's the best news -- the brewery will stay open as the new tanks are being installed, so it will continue serving up craft beer Monday through Thursday from 3 p.m. to 10 p.m., Friday and Saturday from noon to midnight, and Sunday from noon to 9 p.m.