The Best Food Events in St. Louis This Weekend: September 13 to 15 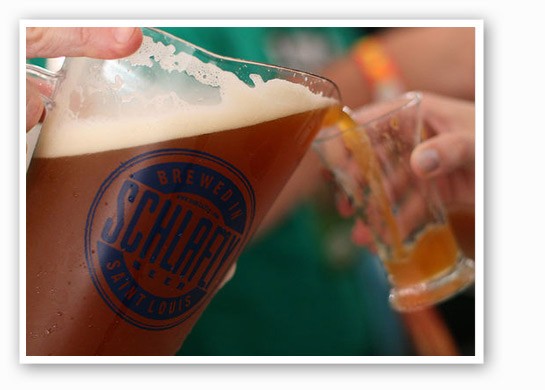 There's another festival this weekend, this time featuring Lebanese food. Check out a dining tour with Art Dimensions or get your beer on at Schlafly's annual Hop in the City. Whatever you choose, this weekend is sure to be anything but boring! Read on for our food-related recommendations.

The night will take your through several courses of food, areas of St. Louis and kinds of art. It begins at the St. Louis Art Musuem (1 Fine Arts Drive; 314-721-0072), of course, with drinks and appetizers. Next, a shuttle will take you to the Soulard Art Market & Contemporary Art Gallery where a salad course will be served. Then it's hors d'oeuvres at the Craft Alliance at Grand Center. The main course, accompanied by a culinary demonstration from Tenacious Eats, will be served at Meyer's Grove. There will also be an art auction of works by Cbabi Bayoc, Megan Rieke and Jennifer Hayes. Enjoy after-dinner cheese selections at Craft Alliance in the Delmar Loop before nibbling on finger foods at the Clayton Art Gallery. 5:15 p.m. Tickets are $27, available here.

The Kitchen Conservatory (8021 Clayton Road; 314-862-2665) promises a "leisurely morning of conversation and laughter" with chef Jean-Pierre. The chef will do a lunch cooking demonstration that beings with a Spanish omelet with tomatoes and peppers. Then he'll whip up bass en papillote with fennel in beurre blanc sauce. Dessert will be blueberry brioche bread pudding. 10 a.m. to 1:30 p.m., $45. Register here.

"Every year Schlafly brews more than 40 styles of beer. While some are available year round, many seasonal and special releases can only be procured for a limited time, and nearly half are only available on tap, never seeing the inside of a bottle. If you blinked and missed your favorite Schlafly specialty beer or are looking to broaden your brewed beverage horizons, then the annual Hop in the City has got your ticket with everything from Pumpkin Ale to Coffee Stout up for the tasting. The $35 admission entitles you to a commemorative tasting glass, live music from Beth Bombara and The Twains, and all the fine Schlafly beer your buds can taste between noon until 5 p.m. today at the Schlafly Tap Room (2100 Locust Street; 314-241-2337 or www.schlafly.com)."

"From 1 to 11 p.m., head to the parking lot beside the restaurant at 3145 South Grand Boulevard for a special block party featuring grilled food, live art, vendors from south city, face painting and even a noodle-eating competition. Show up and see if you can devour a big bowl of Mangia's handmade noodles quicker than the next guy -- a gift certificate to the restaurant for more carbo-loading awaits for the winner. All the music performances of the day feature past and current Mangia employees as well as customers. Outdoor dining options include the likes of ribs, Italian sausage, grilled Portobello sandwiches and melon salads, with plenty of specials on beer all day long. Alternatively, dine inside and have one of the restaurant's specialty dishes like lobster mac & cheese or duck ravioli. Mangia! Mangia!"

This family-friendly bike ride will take you on an adventure with city farming and local CSAs. After meeting at Local Harvest Grocery (3108 Morgan Ford Road; 314-865-5260), you'll ride to four farms, learn about their histories and the importance of urban farming in St. Louis. You can also sign up for CSAs -- community supported agriculture. The ride will end at the Tower Grove Farmers' Market where you can explore and buy local produce. Tickets are $5, $3 for kids under 10. Meet at Local Harvest at 8 a.m.

Get a taste of the Middle East in the Midwest at St. Raymond's annual Homecoming Festival at the Catholic church, located at 931 Lebanon Drive. After mass at 5 p.m., enjoy Lebanese food, drinks and live music from 5 to 10 p.m. Mass will also be celebrated at 10 a.m. Sunday morning, followed by lots more Lebanese food, raffles, children's games, tours of the cathedral and more. Hey, maybe you'll even run into Mayor Slay, who is a member. Admission is free. Saturday, September 14, from 6 p.m. to 10 p.m. and Sunday, September 15, from 11 a.m. to 6 p.m.

"The anniversary party is set for this Saturday, September 14, from 2 - 4 p.m., with sample packs of the all beers, and barbecue provided by the Breese Fire Department. And then there's the release of Ryeday the 13th, a barrel-aged behemoth that's been patiently sitting these last six months in Templeton Rye Whiskey barrels. A high-gravity beer, Ryeday should offer plenty of flavors, like caramel and vanilla mixed with a nice oaky char. Excel will also be releasing a wheat India black ale, "Darkside," which should be pretty awesome, too. Tickets for Saturday's celebration are $30 and include a 750 ml bottle of Ryeday the 13th, a commemorative glass, 10 four-ounce beer pours, plus food and music. Tickets can be purchased in advance here. Designated driver tickets will be available at the door for $10 and include food and soda."

Scooperbowl @ The Fountain on Locust