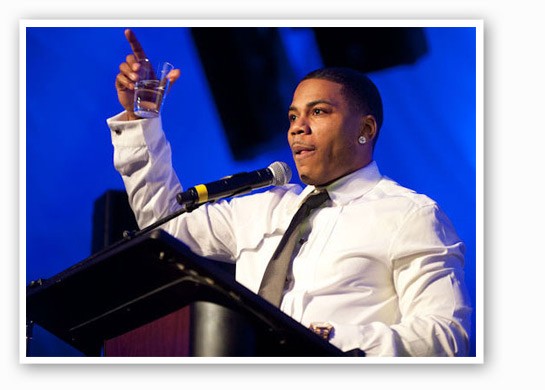 The end of the summer has brought us one of the more surprising collaborations of the year: Nelly and the Honey Nut Cheerios bee (his name is Buzz). Wait, what? You may have seen the TV spots, complete with a new version of "Ride Wit Me" -- this time, Nelly sings "must be the honey." So, naturally, we called him up to see how he met his new "homebee."

See also: Nelly to Work With a Bee On Upcoming Project

"I just thought the opportunity would be real dope, man. I'm always looking to broaden out and make better paths," Nelly tells Gut Check. "In hip-hop, sometimes we look at advancement as a negative thing, like taking away from who we are and what we do, and I just don't think that's the case." As RFT Music points out, in the first commercial, Nelly gives Buzz some swag and then "AutoTunes like a boss."

Nelly says he's been eating Honey Nut Cheerios for a long time, partially because they were one of the few name brands he could afford growing up. "Who doesn't eat cereal? Are you kidding me? We eat cereal in the studio -- it's not even breakfast anymore, it's just cereal now. You can eat it at any time." OK, we have to give him that. Cheerios are pretty dope.

He also says he jumped at the chance to work with director Hype Williams, who is behind the videos for TLC's "No Scrubs," Jay-Z's "Big Pimpin," 2Pac's "California Love," Coldplay's "Viva la Vida" and Kanye West's "Gold Digger." "People love [the commercials]," Nelly says. "They understand the growth and advancement -- getting the chance to be in business with a blue chip company like General Mills, and that don't happen very often."

Yeah, we get it -- must be the money. (Too easy?) Watch the commercials below.