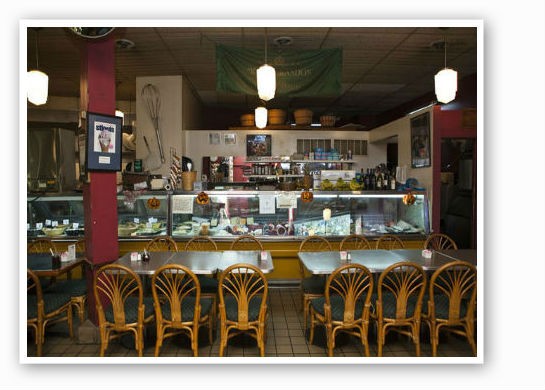 When scanning a menu, it's easy to gravitate toward the familiar, the go-to. Far too often, though, that means missing out on a specialty dish or ethnic delicacy. In this series Gut Check tracks down St. Louis' more unusual culinary offerings in hopes of expanding our collective food knowledge and answer the question: Should you really "Eat This?!"

Kopperman's Delicatessen (386 N. Euclid Avenue; 314-361-0100) is the quintessential New York delicatessen that just so happens to also be a St. Louis institution. This place is serious about sandwiches: overstuffed, towering stacks of meats and cheeses that leave you sated and content.

To go along with the sandwiches, oversized antique circus posters decorate the walls, and the outdoor seating area is arguably the best spot in the Central West End to take in the comings and goings of Euclid Avenue.

And while you can choose from a menu filled with good old-fashioned deli sandwiches, we're here for the Tongue Fu: beef tongue, but mixed in with pastrami and corned beef, with Swiss cheese and mustard on pumpernickel bread. 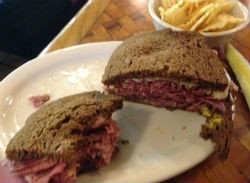 While beef tongue, or any tongue for that matter, might sound unappetizing, delicatessens have long served up the underappreciated meat in various types of sandwiches. In fact, beef tongue was and still is a staple of traditional Jewish cuisine. Why? Well, because tongue was once considered a throwaway, cheap cut of beef that was often discarded or sold as scraps.

But immigrant Jewish deli owners realized that tongue, much like brisket, could be improved markedly after hours and hours of slow cooking. Plus, tongue is a boneless tissue and high in fat, so when prepared correctly, there's the potential for a super-rich and tasty final product -- there's a reason taquerias are serving up tongue in their delicious tacos.

Kopperman's Tongue Fu is done to perfection -- a soft, tender chunk of meat sliced into thin pink strips that make for one hell of a sandwich. If you're worried about a tongue-like texture (you know, rough and bumpy) have no fear, the tongue is skinned first (!). When it comes down to it, tongue looks and tastes like a combination of brisket and pastrami, just a bit fattier.

The sandwich's accompanying pastrami and corned beef are more of a compliment to the buttery and tenderized tongue; likewise, the melted Swiss and mustard work just fine. Kopperman's knows what it's doing. The sandwich is served hot with your choice of potato salad, coleslaw or potato chips and, of course, a big deli pickle.

So next time you're thinking about ordering the same old Reuben, how about tongue instead?