Twinkies Have Arrived in St. Louis! 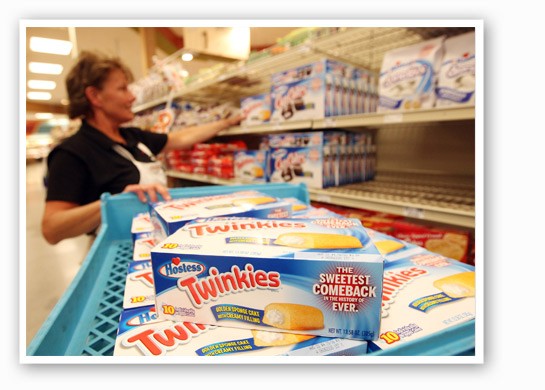 Hostess is finally back in business. The first batch of Twinkies arrived in St. Louis this weekend before today's national rollout. Hostess also announced that the new and improved snacks now have a longer shelf life: 45 days.

See also: -Twinkies Hit Shelves July 15 -Hostess: It'll Cost You At Least $140 Million to Make Twinkies -A Twinkie By Any Other Name Would Taste Just As Sweet

They used to only last 26 days (though very unscientific experiments point to a much longer lifespan), and we really don't want to know what they added to up the number. They're also smaller -- a Twinkie used to weigh 42.5 grams, and now it's down to 38.5 -- and some people are really pissed about it. A spokeswoman told USA Today that the downsizing was actually done late last year before Hostess declared bankruptcy.

Mini Muffins will be on shelves next week, and Ho Hos, Zingers and Suzy Qs are set to come out in August. They're also freezing Twinkies for retailers who request it so they can stamp their own expiration dates. We guess that means Twinkies really do last forever!

Desserts & Sweets This Just In