Paula Deen to Star in Her Own Comic 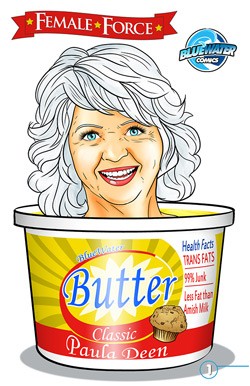 Surprisingly, not everyone has canceled their Paula Deen books. Bluewater Productions will roll out their "Female Force" biography comic book featuring the butter-loving chef this fall. Here's the kicker: they aren't making fun of her.

The Female Force series focuses on female empowerment and has comics about Margaret Thatcher, Angelina Jolie, Ruth Bader Ginsburg and Ellen DeGeneres. Paula Deen seems like a weird choice even before the whole "I is what I is" thing, but are they really putting her up as a role model now?

"I am very proud of what this series represents and Paula Deen to me still fits into this category," publisher Darren Davis tells Gut Check. Bluewater is apparently adding her "latest controversy" to the final draft, but the story will focus on "her humble beginnings and the results of bursting certain stereotypes."

We're not quite sure what stereotypes she burst -- that women are good at cooking? That Southern food is fattening? That a life of fried chicken will give you diabetes? Davis says that he saw her as changing the Martha Stewart ideal of cooking and entertaining.

"Martha Stewart turned cooking into this new, refined thing and Paula Deen just kind of took it back and went back to butter," Davis says. "Everybody was so health-conscious and all that stuff and Paula Deen kind of broke that by saying, you know what? I like butter. I'm gonna use butter. Everybody should use butter." Gut Check agreed that yes, butter is indeed awesome, but Deen also developed Type II Diabetes.

The Paula Deen comic book is set to come out this October, and Davis hopes that Bluewater will be able to work with Deen to give some proceeds to a charity of her choice, as they did with Ellen DeGeneres, Olivia Newton-John, and Carrie Fisher. We're still not convinced this comic is a great idea, but at least it has the potential to benefit some of the people hurt by Deen's comments -- a chance for her to step up to the plate. Maybe she could just take a page from her SNL alter ego. "Which N-word...nutrition?"