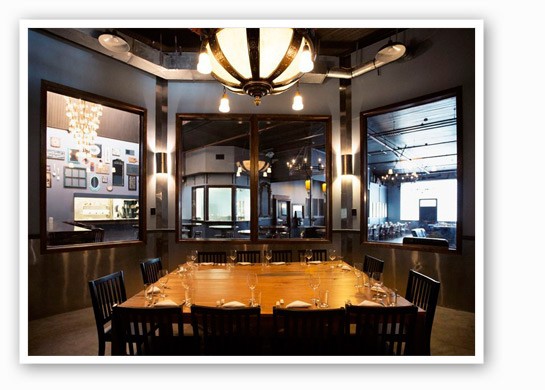 Carnival food doesn't exactly scream high-end. But at Table (1821 Cherokee Street, Benton Park, 314-449-1888), the chef's tasting menu manages to do just that. Last weekend, the reservation-only tasting menu, called The Table, debuted with a bevy of childhood carnival favorites, albeit with a twist. 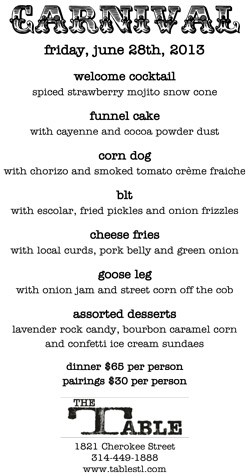 The Table was inspired by No Menu Mondays at Vires' other restaurant, the Home Wine Kitchen (7322 Manchester Road, Maplewood, 314-802-7676). The Table, available at Table on Friday and Saturday nights, does have a menu, but it's released the Wednesday before and changes each week. Vires says reservations are snapped up even before the fare is revealed.

"We love the idea of communal dining and really wanted to bring that to St. Louis. So many times at Home Wine Kitchen, we would see people reach across the aisles to share stories, tastes of wine and recommendations to the people at the table next to them," Vires says. "We love seeing that, and we wanted to give people that fun, interactive dining option."

Daily offerings include lamb meatballs with blueberry-chipotle glaze ($9), rye whisky smoked trout ($8) and Ozark forest mushroom "escargot" ($12). Home Wine Kitchen is often cited as a favorite of St. Louis chefs, partly due to its ever-changing menu. The Table gives Vires a chance to mix it up at her new restaurant, too.

"It's an adventurous night out -- it's definitely for the adventurous diner that wants to try some new approaches to things," says Vires. "We've been having a lot of fun with the menu and people are be responding to that." Most of the produced used at Table is local, as well as much of the syrups, grains and nuts.

Future evenings at The Table could be all seafood, a vegetarian menu, or a picnic-themed dinner. "Fun and quirky, just like the restaurant," Vires says. Reservations are required for The Table; dinner is $65 a person and wine pairings are $30 a person. Call 314-449-1888 to score your spot.