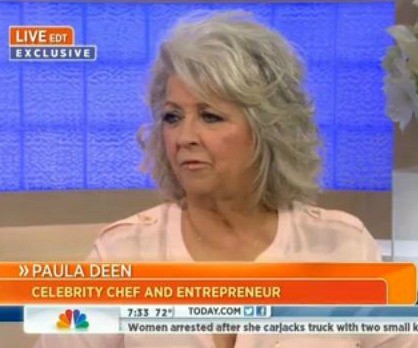 Springfield-based media company Food Channel is not the Food Network. It is in no way affiliated with the Food Network, nor has it ever been the host network for recently-disgraced celebrity chef Paula Deen.

However, you wouldn't know that from looking at the Food Channel's Facebook page which lit up after the Food Network announced it will be dropping Deen in light of her admission that she used racial slurs in the past.

"Bring Back Paula Deen or I will boycott your channel. At least she is honest. Most if not all of the black people i know have also used the N word," writes one commenter.

"Next thing you'll be hanging Paula Deen. Your back stabbing her, and we know she has made the station loads of money," says another.

In case you missed it, Deen is in hot water after a court deposition revealed she not only admitted to using the N-word, she also apparently wanted black servers to dress up like slaves at a plantation-style wedding. The revelation has cost her a contract with Food Network and several endorsement deals, most notably with Wal-Mart and pork-producer Smithfield Foods. Here's one of the numerous apologies Deen made, this one came after a less-than-humble non-pology where she went with a "that's just the way we talked back then" defense:

According to editor-in-chief Kay Logsdon, Food Channel "is a food-knowledge website geared to foodies" which produces recipes, articles and short webisode cooking demonstrations. While they aspire to television and have some of their short cooking segments airing in test markets, they are not yet a full-fledged network.

"We always get messages meant for the Food Network," says Logsdon. "Any time we get a chance to engage with people who love food that's a good thing for us."

Still, after receiving thousands of angry e-mails, Facebook and Twitter messages, and phone calls, Logsdon decided to make a statement on the Food Channel's website to clear things up:

Attention all those who love Paula Deen.

We've been getting your emails. Your phone calls. We're pretty sure the good old fashioned mail will soon follow.

We get that you are mad about her contract not being renewed. The problem is, you are calling and writing the wrong people.

In the statement, Logsdon also included some examples of e-mails she's been getting and they are sort of amazing:

if this is how you treat honest people - we will not watch your channel anymore - I can't believe how un-smart you are! - your contract is not renewed!

LEAVE HER ALONE HAVE YOU COMPLETELY LOST IT ?? WAKE UP. HELLOOOOOOOOOOOOO.

I can't believe that you are cancelling Paula's show because she said something wrong and apologized for it. You have chefs on there with spiked hair, bare feet, piercings and tattoos galore. You have chefs that cuss and swear. Haven't you ever heard of forgiveness?

Despite the vitriol, Logsdon decided to turn this unexpected attention into a business opportunity -- by appealing to Deen herself to come on over. "We'd be more than willing to have discussion with Ms. Deen or her people," says Logsdon. "If she wanted to get involved with a fledgling channel with a great name but not yet on TV, and bring her content, that's all we need."

Food Channel reached out to Deen's company, but is also encouraging Deensters to write in support of the move as well.

Gut Check asked Logsdon if she had any reservations about hitching her wagon to Deen at this particular point in time, given the pretty bizarre, racially charged allegations.

"Our company certainly has a non-discriminatory policy. We wouldn't support any of that. Our understanding of it is that was a long time ago," says Logsdon. "We're a small company, we can give her a clean slate and say, 'OK, let's take it from here.' And that's what her fans want."

And Deen Nation seems to be responding, although the confusion rages on. While the Food Channel Facebook page is now filling up with messages of support, fans still seem to have no idea what the Food Channel actually is (again, it is primarily a website):

Are you on Dish and what channel ?

I have Directv, where can I find this channel??? Oh please Lady and Sons. Move your shows.