Before the torrential rains, ominous streaks of lightning and public protests, Gut Check had a terrific time this past Saturday evening at the St. Louis Brewers Heritage Festival. That's because we did our fair share of "sampling" before the atmosphere turned ugly (in more ways than one.)

This year's festival featured more than twenty regional breweries gathered under massive tents in the Central Fields of Forest Park. The nearly 100 different beers were arranged alphabetically by style, so we started at the ales and worked our way down. What we discovered was an excellent sampling of St. Louis' robust beer-brewing community.

Trends: On a hot, humid night, hoppy IPAs and drinkable ales were the biggest crowd pleasers and thus in abundance. On the downside, very few stouts were on hand. (So maybe we need beer festival in December? We say, emphatically, yes!) Schlafly, offering up a total of fifteen different styles, seemed to be the most familiar and most sought-after brewery. But drinkers also lined up at a few of the harder-to-find, less prominent breweries as well. The general goal of most people was to just try 'em all.

One of our first samplings was with the Saint Genevieve-based Crown Valley and its IPA, the "Wooden Nickel." It was a fresh, crisp way to begin the evening and made us want to drive down to Crown Valley's tasting room and winery at some point in the near future.

Going in a completely different direction, we moved on to 2nd Shift's "The Katy," a wood-aged sour. Sours are currently all the rage with beer snobs, probably because they are the least accessible to the uninitiated. As the name suggests, sours are bitter and a bit fruity and acidic. At times they can be so overpowering that your lips become permanently puckered. But we were pleasantly surprised to discover that 2nd Shift's sour was light, airy and drinkable -- that is, not cringe inducing.

We next went in search of Perennial, one of the most experimental and exciting breweries in St. Louis. Unfortunately, Perennial only brought one beer, the "Black Walnut Dunkel," a dunkelweizen, or dark wheat beer. Perennial's version is brewed with Missouri black walnuts and was delicious; its sweet, nutty swirls made it definitely one of the most flavorful beers at the festival. All of which made us wish Perennial was better represented. Oh well, we pressed on.

In the vein of the experimental, Schlafly took its American pilsner and shot it through a "hopinator," designed to infuse fresh Hallertau hops before the beer flowed into our glass. It was strange -- you could definitely taste fresh hops, but it wasn't really pleasant or tasty as it was unusual, more of an oddity, like eating grass.

At the Homebrewers tent, several local homebrewing organizations poured some of their member's best brews. And to be honest, there wasn't much of a discernible difference between homebrews and some of the professional brews, which is meant more as a compliment to the homebrewers than a shot at the pros. Mike Walters, representing the St. Louis Brews Homebrew Club served his American IPA and it was pretty tasty -- bottle it up!

Our next stop was newcomer Alpha Brewing Company, which recently opened up shop down on Washington Avenue. Alpha's "Topaz," another IPA, was a bit weak, maybe even flat. Especially when contrasted with one of our favorites from the expansive field of IPAs, 2nd Shift's "Art of Neurosis" that left our taste buds sizzling.

Outside of IPAs, Ferguson's "Pecan Brown" was so rich we took our time and drank slowly so as to savor each sip (and then we went back for a second glass). Other winners, at least for Gut Check, were Urban Chestnut's "STLIPA," and Schlafly's "Black IPA."

But then again, there were so many great beers on hand it was impossible to really appreciate them all. Especially when our evening was tragically cut short by the raging summer storm. Even so, Gut Check thoroughly enjoyed ourselves and came away not only a bit wobbly, but also with a greater appreciation for our city's brewers and their fine beers. Keep em' coming. 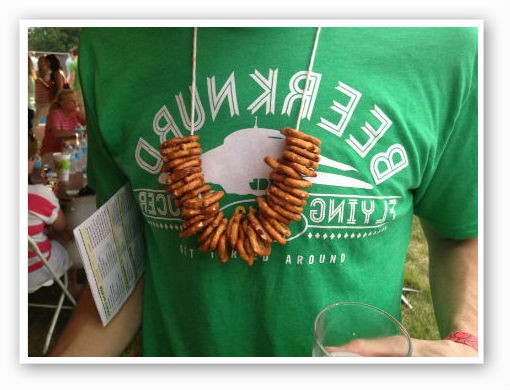