Track Your Bud: Busch Stadium Budweiser Not from St. Louis? 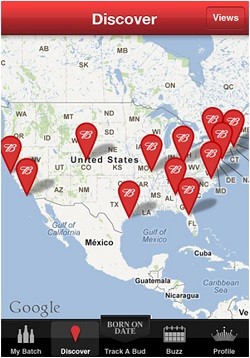 Gut Check recently received an e-mail from an inquisitive reader alerting us to a somewhat counterintuitive discovery made while using Budweiser's new Track Your Bud app.

The app is pretty straightforward: Plug in the "born on" date or QR code found on the can or bottle and the origins of your beer will pop up -- informing you when your beer began the aging process and which brewmaster oversaw its production.

While attending a Cardinals game at Busch Stadium, our tipster decided to test the app. To his surprise, he discovered that his $8.25 Bud Light bottle was "born" in Williamsburg, Virginia.

Wait, what?! Why would Budweiser from Virginia be sold in Busch Stadium when Anheuser-Busch's main brewery is just a home run's distance from the ballpark?

And to that point, what happens to the "local" beer from Soulard after it leaves the brewery? Being the investigative journalists that we are, Gut Check decided to look into the matter and see what we could dig up.

First off, with the newly downloaded Track Your Bud app in tow, we scanned a Bud Light from the Schnucks in University City, a Budweiser from a gas station in midtown and a Michelob Ultra at a gas station in Tower Grove. All of them had their origins here in St. Louis.

So what's going on? How did a rogue Virginia-brewed Bud Light find its way to Busch Stadium?

"Some specialty packages, like plastic bottles, are produced by our sister breweries who have unique packaging capabilities," answers Jeff Pitts, the senior general manager of A-B's St. Louis brewery.

For safety purposes, Busch Stadium uses only plastic bottles, and A-B's plastic bottles are solely manufactured at the Williamsburg, Virginia, brewery. Pitts notes that other specialty items are also brewed at only select locations. The new Budweiser bow-tie cans, for example, are only packaged at Anheuser-Busch's Los Angeles and Williamsburg facilities.

But rest easy, St. Louisans. The next time you crack open a -- in the words of Mike Shannon -- a "cold, frosty Budweiser" in St. Louis, chances are good it is a local product.

In fact, according to Pitts, more than 85 percent of all Anheuser-Busch beers purchased in the St. Louis area are brewed and packaged down in Soulard on Pestalozzi Street. And the beer that isn't swilled before leaving the 314 ends up in twelve nearby states, including Indiana, Iowa, Oklahoma and Wisconsin, where we are willing to bet that a cheesehead with a smartphone is just now in discovering that his Michelob isn't from Milwaukee.