When we heard about the event, Gut Check had only one thought: Where do we sign up? We are, after all, a professional eater. True, we don't typically deal in volume -- excluding tequila (and Budweiser) -- but eating is eating, right?

The fried taco being somewhat unfamiliar to these parts, we asked Morales to fill us in (as it were) as to what we'll be ingesting on Saturday.

"This type of fried taco is not the traditional street food in Mexico," the food-stand man imparts, referring to the south-of-the-border staple that typically consists of a corn tortilla dolloped with meat, cheese, fish, mashed potatoes or some other tasty substance, folded in half and fastened with a toothpick, then deep-fried. "We use shredded lettuce and shredded cheese to top our tacos. You may say that we have Americanized them. Many people in this area have never heard of a fried taco. There are places in Texas that serve fried tacos, but in this area they are becoming a new item." 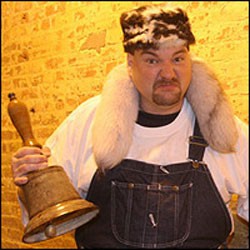 The World League of Competitive Eating (WLOCE) has sanctioned this taco-off. It appears our most fearsome competitor will be Dale "Mouth of the South" Boone, who has downed a 7-pound burger in 47 minutes, 115 pieces of sushi in 10 minutes and 100 oysters in 2 minutes.

This being the Bethalto contest's inaugural year, there is no benchmark for Gut Check and our fellow scarfers to aspire to. But how many fried tacos can Morales eat?

"I have eaten as many as five tacos in one sitting, he says. "And that was stretching it. These are not your typical tacos."

Festivities commence at 1:30 p.m., with the contest proper starting at about 2:30.

"The Bethalto Jaycees contribute so much to our community, we wanted to find a way to bring more people to their country fair," Morales says. "The more people they have at the fair, the more they can do for the community."