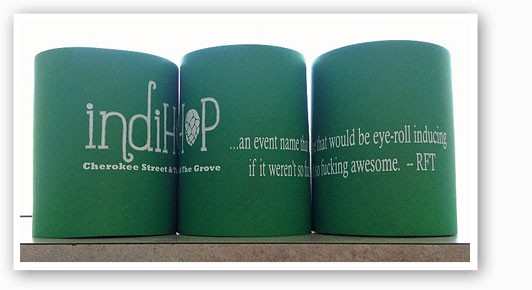 Finally, we here at the RFT know what it is like to be misquoted. And let us tell you, it feels quote-unquote fucking awesome. Especially since that misquote has found its way onto the official beer koozie of this weekend's IndiHop.

Yesterday organizers for the beer festival alerted Riverfront Times that they were using our description of last year's event for publicity purposes.

In a preview of the inaugural IndiHop last June, we wrote: "Cherokee Street and the Grove neighborhood are playing host to IndiHop, an event name that would be eye-roll inducing if it weren't so damn cool."

But that's not -- exactly -- what it says on IndiHop's koozie that attributes the following to RFT: "IndiHop...an event name that would be eye-roll inducing if it weren't so fucking awesome."

Fucking awesome? WTF? Did the organizers of IndiHop have their beer googles on when they read the RFT?

No. Not exactly. Brooks Goedeker, a member of IndiHop's organizing committee, admits that he and his cohorts were just following a long tradition among beer drinkers when they decided to embellish a bit by replacing "damn cool" with "fucking awesome."

"We spent about a month and a half trying to come up with a name for the event before finally landing on IndiHop," says Goedeker. "It's a corny name, we agree. That's why we loved the RFT 's take on it. Despite the name, it is still a cool event."

Correction. A "fucking awesome" event, and Riverfront Times couldn't be happier about being on IndiHop's koozie, regardless of what we may -- or may not -- have written about the event in the past.

This year's IndiHop takes place this Saturday (June 1) and features beers from thirteen area microbreweries. For more information and tickets, check out indihop.com.