Billy Goat chips came into existence as a popular side dish at Brian Roth and Rob Lyons' Billy Goat Restaurant and Bar. The partners closed the restaurant but in February 2009 opened the Billy Goat Chip Company (3136 Watson Road; 314-353-4628).

Billy Goat co-owner Brian Roth came to chips from a prior career as a chef.

Today Billy Goat Chips can be found all over St. Louis -- or, if you're out of town and find yourself hankering, online via the company's website, billygoatstl.com.

"We try to make your product when you order it," says Roth. "We want to make sure that the chips are able to be sold to the consumer within 48 hours at most".

The humble russet potato: The main ingredient in each and every Billy Goat Chip. The company fries up more than 6,000 pounds of potatoes a week. 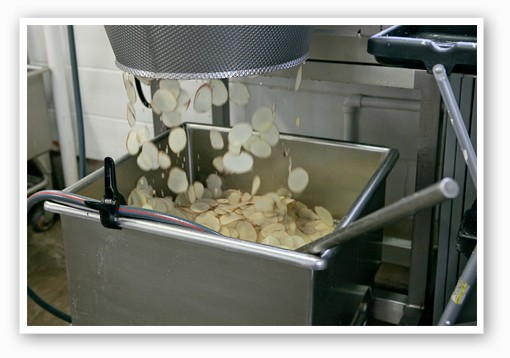 In the early days, Billy Goat Chips were hand-sliced by necessity. Nowadays necessity is the mother of bulk slicing.

Sliced spuds are rinsed and agitated in water. This helps to remove starch and keeps the potatoes from sticking together. Each batch of sliced potatoes weighs in at 22 pounds.

Billy Goat fries its chips in canola oil in a 145-gallon fryer, approximately four minutes per batch, as Matt Thone and Mike Cochran keep a careful eye on the proceedings. "Each chip is like a snowflake," says Thone. "Not one of them is the same."

Once the chips are golden brown, they're lifted from the fryer, drained and taken to be seasoned.

Chips are seasoned with Billy Goat's signature "dust" in a rotating tumbler. 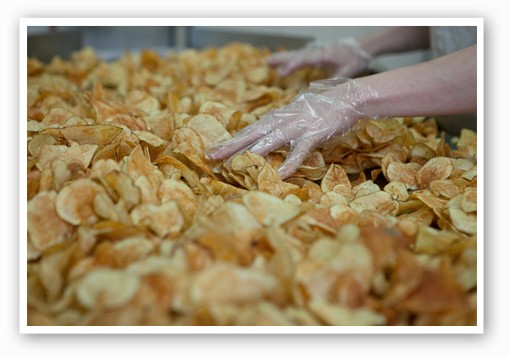 Seasoned chips are laid out on a table to cool. Here Matt Beumer scans the landscape for imperfect chips. 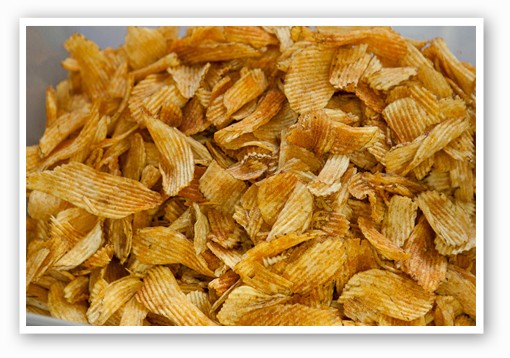 On Memorial Day 2011, Billy Goat introduced Kicker Chips, a thicker, rippled chip with a spicier version of the company's signature seasoning. (This "dust" was developed from a chicken-wing rub that was used at the chip company's progenitor, the erstwhile Billy Goat Restaurant and Bar. 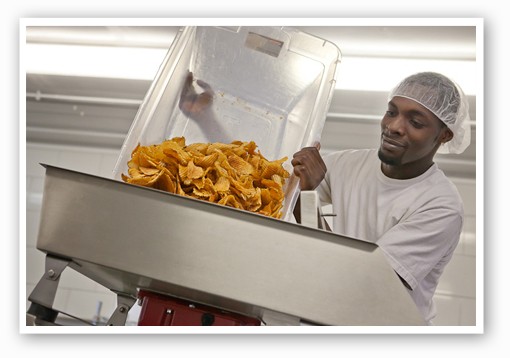 Steven Burt carefully dumps a batch of the Kicker chips into the bagging machine.

Kicker bags await sealing. Each bag weighs an ounce and an eighth.

A Kicker bag heads down the conveyor belt to be boxed. The entire process, from whole potato to bags-in-box, takes about 30 minutes.

Editor's note: Sometimes food renders Gut Check speechless. That's why God invented the DSLR. In our continuing effort to cause your mouth to water onto your keyboard, we bring you our weekly Food Photo Essay.