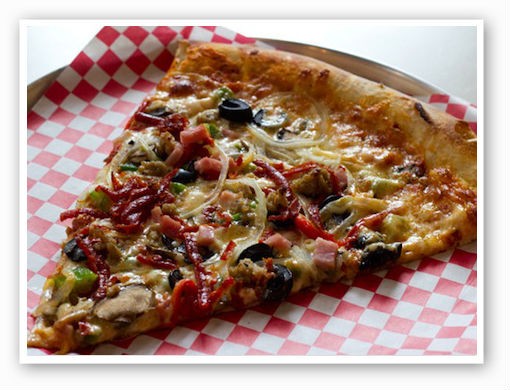 Another by-the-slice joint gives it a go downtown. Will this one gain a foothold? That's what this week's review of King Louie's Empire Deli & Pizza (1131 Washington Avenue; 314-553-9999) seeks to answer.

You cut a pizza into wedges (everywhere outside of St. Louis, that is) and you call the result "slices of pizza," but this is not the same thing as "pizza by the slice." The former is geometry. The latter is art.

For pizza by the slice, you first must engineer a single slice large enough to be a meal unto itself (or paired with one other slice at the most), yet not so large that you have to charge more than a few bucks for it. The crust should be thin, but it must also support sauce, cheese and toppings. Ideally -- this is mandatory in New York City, the Paris of pizza by the slice, but St. Louis isn't yet a walk-and-eat city -- you should be able to hold the entire slice in one hand, creasing it lengthwise if necessary, without the end drooping. This prevents the toppings from sliding off and splattering across your lap or the ground.

A dozen (at least) by-the-slice joints should be battling one another for supremacy in downtown St. Louis. Partisans should be arguing the merits of each online. Yet St. Louis has remained curiously immune to the charms of the slice.

Check back tomorrow to read my review of King Louie's Empire Deli & Pizza.