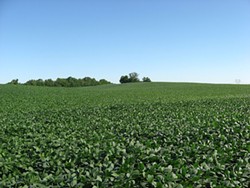 The U.S. Supreme Court ruled unanimously this morning that an Indiana farmer violated Monsanto's patents on genetically modified "Roundup Ready" soybean seeds. The case, Bowman v. Monsanto, hinged on whether the farmer, Vernon Bowman, ought to pay Monsanto for seeds that he purchased from a grain elevator and planted for a late-season second harvest.

Those seeds, though marketed at the grain elevator as "commodity seeds" for human or animal consumption, ended up producing for Bowman the same sort of herbicide-resistant soybean crop as the Monsanto seeds that he had paid the St. Louis-based company to use in his first planting of the season. In total, Bowman harvested eight late-season crops with this technique.

(As a rule, Monsanto licenses its patented seeds to farmers for use in one and only one year. The following year, farmers cannot replant the previous year's seeds but must again license new seeds from Monsanto.)

In her opinion, Justice Elena Kagan told Bowman, in essence, "Nice try, but no."

In her decision (link PDF), Kagan eviscerates every argument that Bowman made in his defense. For instance, Bowman contended that "patent exhaustion" applied because the patented seed had already been sold once, from a farmer to the grain elevator from which Bowman then purchased it.

Not so, Kagan writes:

Under the patent exhaustion doctrine, Bowman could resell the patented soybeans he purchased from the grain elevator; so too he could consume the beans himself or feed them to his animals. Monsanto, although the patent holder, would have no business interfering in those uses of Roundup Ready beans. But the exhaustion doctrine does not enable Bowman to make additional patented soybeans without Monsanto's permission (either express or implied). And that is precisely what Bowman did.

In a larger sense, Bowman argued that (in Kagan's words) "seeds are meant to be planted." Kagan states this would create an "unprecedented exception" to the protections afforded by patent law.

...once again, if simple copying were a protected use, a patent would plummet in value after the first sale of the first item containing the invention. The undiluted patent monopoly, it might be said, would extend not for 20 years (as the Patent Act promises), but for only one transaction. And that would result in less incentive for innovation than Congress wanted.

Bowman's most audacious argument -- and possibly also the point where even the most avowed Monsanto hater had to throw up his or her arms and say, "We had our hopes invested in this guy's case?" -- is that he isn't responsible for replicating Monsanto's patented seed because seeds are destined to sprout.

"Are you kidding me?" is likely what Kagan wanted to write.

But we think that blame-the-bean defense tough to credit. Bowman was not a passive observer of his soybeans' multiplication; or put another way, the seeds he purchased (miraculous though they might be in other respects) did not spontaneously create eight successive soybean crops.

Monsanto published a statement on its website after the ruling, which includes this quote from executive vice president and general counsel David F. Snively:

The Court's ruling today ensures that longstanding principles of patent law apply to breakthrough 21st century technologies that are central to meeting the growing demands of our planet and its people. The ruling also provides assurance to all inventors throughout the public and private sectors that they can and should continue to invest in innovation that feeds people, improves lives, creates jobs, and allows America to keep its competitive edge.