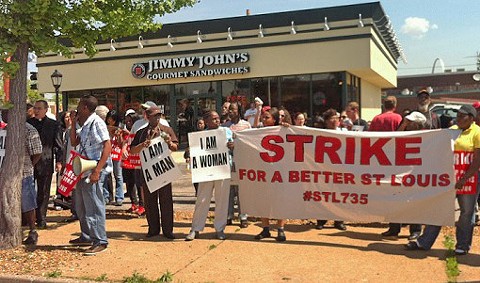 Rasheen Aldridge had just finished working the lunch rush at the Jimmy John's in Soulard when he says his manager handed him a hand-written sign and asked that he hold it while he snapped a photo. The sign's message? "I made three wrong sandwiches."

"It was humiliating," Aldridge, nineteen, recalls of the incident about a month ago that he says came in retaliation for him putting eight peppers on a sandwich that called for just five and layering meat in the wrong fashion on another sandwich. "I felt that I had to pose for picture. In the fast-food industry, you can get fired at the drop of a hat."

That indignity, coupled with other workplace grievances such as low pay and a lack of benefits, has Aldridge joining dozens of other St. Louis fast-food workers who plan to walk off their jobs this week in protest. Like similar strikes recently in New York and Chicago, the movement here calls on fast-food restaurants to pay their workers a living wage ($15 an hour as opposed to the industry norm that is closer to the minimum wage of $7.35) and to not retaliate against them for organizing a union.

"The fact is that these fast-food chains are multibillion-dollar companies that are making billions in profits, but the worker at the bottom isn't seeing any of that," says Rev. Martin Rafanan with Missouri Jobs with Justice that is spearheading the campaign "STL Can't Survive on $7.35."

The campaign cites statistics showing that 36,000 St. Louisans currently work in the fast-food industry for a median wage of around $8.71. Meanwhile, the self-sufficiency level for an adult with one dependent living in St. Louis calls for an hourly income of $14.84.

"The end result of these low-wage jobs is that the government has to subsidize people in order for them to make ends meet, and the fast-food chains are fine with that," adds Rafanan.

And it's not just traditional fast-food joints that are being asked to step up.

Continue on for other restaurants targeted in the strike and complaints from fast-food employees. Chipotle, for example, gets a lot of positive press for its hormone-free meats and support of sustainable farming. But working for the chain of Mexican restaurants is hardly a fiesta, says Patrick Leeper.

The 23-year-old Leeper is scheduled to work today at Chipotle's location in the Delmar Loop but instead says he plans to march with STL Can't Survive on $7.35. In his three-and-a-half years working for Chipotle, Leeper says, his pay has gone up just 40 cents -- from $8.15 to $8.45. And despite working at the restaurant full time, he has no healthcare or other benefits offered to workers in other fields.

Leeper acknowledges that protesting outside the Chipotle this afternoon (when the labor campaign plans a rally in the Delmar Loop) could anger his managers.

"The way I figure it, what is the worst thing I have to lose?" he says. "I'm forced to make sacrifices on a daily basis. My paycheck barely pays the rent. I have to ask myself, 'Do I eat or pay the bills?'"

If successful, the fast-food workers would organize under the independent union St. Louis Organizing Committee. In addition to better pay and benefits, a union contract could also guarantee fast-food workers a more structured work schedule -- something that Aldridge at Jimmy John's would welcome.

He says he and his colleagues are routinely scheduled to work twice a day -- for a few hours during lunch and then a couple more hours in the evening -- so that the restaurant can cut labor costs and avoid giving workers a rest or a meal.

"If we work five continuous hours, we're supposed to get a break and a sandwich," says Aldridge, who works at the restaurant in between classes at St. Louis Community College. "We put up with a lot. Besides the low pay, there's just a tremendous amount of disrespect."