Congrats to Jilly's Cupcake Bar & Cafe (8509 Delmar Boulevard, Ladue; 314-993-5455), two time winner of Food Network's Cupcake Wars! Back in February, Jilly's cupcake chef, Casey Shiller, and its executive chef, Dana Holland, duked it out against other past competitors for a chance at redemption. The theme was the South Beach Food and Wine Festival in Miami, and Jilly's represented the Midwest in what became a battle of the regions.

Shiller couldn't tell us much about the episode when we spoke in April, but the episode aired on Sunday evening, so now the secret's out. Jilly's cupcakes took home the grand prize of $10,000 and the opportunity to have its own display at the South Beach Food and Wine Festival.

Screen caps from the episode as well as details about the winning flavors after the jump.

We're waiting to hear back from the super busy Shiller, but in the meantime, here are some of our favorite moments from the show: 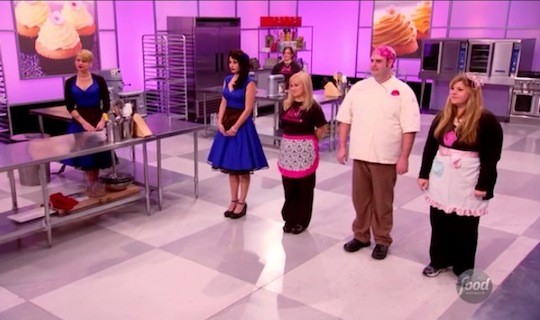 Shiller and Holland's fellow competitors came from different regions across the U.S. From left to right, they are: Sweet Mess Cakery from Los Angeles; Just Cupcakes from Virginia Beach; Jilly's Cupcake Bar (our local heroes) and Sugar Mommy Cupcakes from Denville, New Jersey. Sugar Mommy Cupcakes was eliminated in the first round, but the judges loved Jilly's Cuban coffee-inspired cupcake. The second round required the remaining bakers to create three cupcake flavors inspired by Miami and the South Beach Wine and Food Festival. Jilly's gave the judges the following treats: 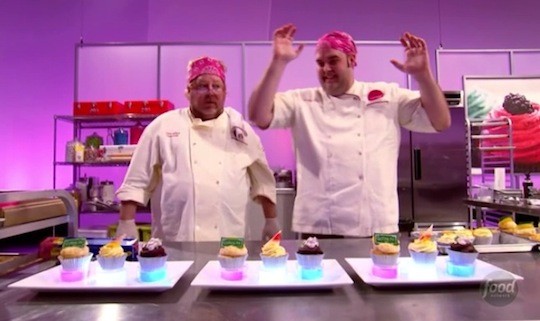 One of the things that set Jilly's apart during the second round was presentation. Shiller found light-up cupcake platforms in the pantry and decided to use them to display his cupcakes for round two. Contestants generally display their cupcakes right on the plate, but as Shiller said, "We want to be the difference-makers."

The judges loved Jilly's second round of cupcakes, but made a few suggestions before sending them along to Round 3, which involves making 1,000 cupcakes and designing a display to show off the sweet treats. Sweet Mess Cakery was sent home. Shiller and Holland took the judges' advice about a few elements of their cupcakes and managed to create a staggering number of them in the allotted time. Jilly's display was modeled after the Miami skyline, a nod to South Beach that the judges appreciated. Though they also liked Just Cupcakes' offerings, the judges crowned Jilly's the winners. Shiller considers this less a victory for Jilly's, and more a victory for the often under-appreciated Midwest food scene.

As winners, Shiller and Holland were able to attend the South Beach Wine and Food Festival and feed their winning cupcakes to a number of celebrity chefs from around the world. They even had a moment with our buddy, Andrew Zimmern! 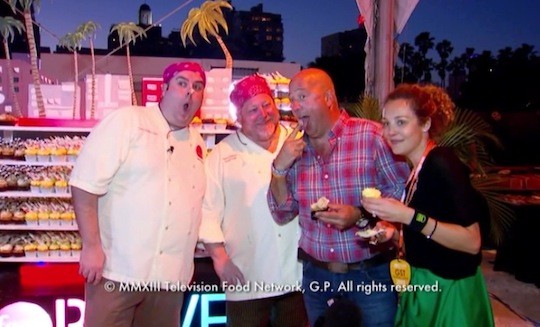 Here at Gut Check International Headquarters, we were lucky enough to snag some of the winning cupcake flavors to give them a taste.

Jilly's delivered some cupcakes for us this morning, so naturally, we ate them for breakfast. And we must say, we really, really liked them. We're used to getting cupcakes from Jilly's that are so huge, we kind of don't know what to do with them. They're tasty, yes, but daunting. The winning flavors were reproduced in normal cupcake size, which is perfect. They were more moist than Jilly's giant cupcakes, and the fillings were small enough that they didn't detract from the cupcake-eating experience. 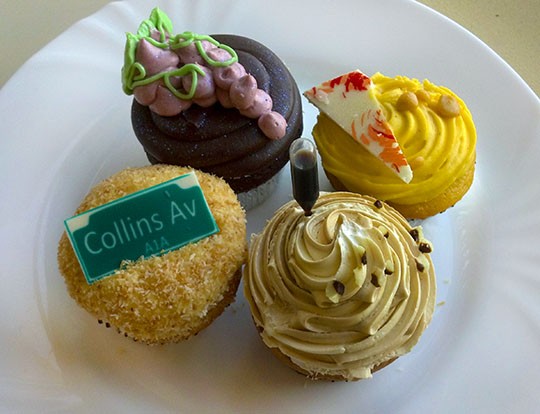 The cupcakes also looked just like they did on the show, which was a pleasant surprise. Jilly's seems to take its customers' opinions just as seriously as the judges'. Thanks, guys!

The flavors were somewhat wild (to reflect the Miami theme), but we found them to be a pleasant departure from the everyday cupcakes one might find at a grocery store. It seems that Jilly's had a wonderful experience at Cupcake Wars, and thanks to them, Gut Check had a wonderful eating experience this morning.

If you don't mind though, we're going to go fall into a sugar coma now. Wake us up when it's time for dinner.