Released Today: New Budweiser Can Shaped Like a Bow Tie 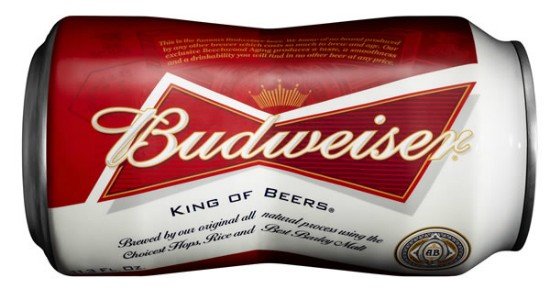 Let it be known that Gut Check is always on the cutting edge of technology. Especially when said technology involves beer.

Today, St. Louis' own classic American lager, Budweiser, is loosing upon humanity a new beer can -- not simply an updated label or artwork, but quite literally an entirely new can. The can takes the form of Budweiser's classic "bow tie" symbol, which is emblazoned on every Budweiser product: Yes, ladies and gentlemen, now even the cans themselves feature a cinched, bow-tie shape.

The new product will be sold in eight-packs, and the changes don't stop there: Another feature that has attracted attention is the can's 11.3-ounce volume, down a whopping 0.7 ounces from the standard 12-ouncer we know and love.

We cracked open an eight-pack in the office. The tasting panel agreed that the beer smells and tastes like Budweiser. (We drank it straight from the can, but we took a look and can confidently report that it looks like Budweiser too.)

The cans, though, are different. They're...thick. Really thick. You know how when you open a can of Bud (or any other beer, or any soda), you can dent the can simply by pressing gently with your thumb? Well, not this can, pal.

Because Gut Check always goes the extra mile, we tracked down Pat McGauley, vice president of innovation for Anheuser-Busch, and asked him about the genesis of the new can, and also about whether its physical peculiarities caused any engineering challenges.

Next: Kicking the new Bud can with Pat PcGauley, VP of innovation for A-B... 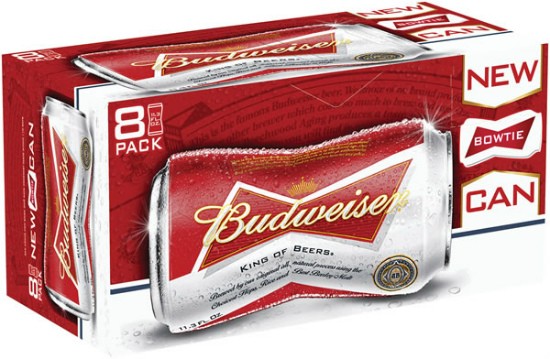 Pat McGauley is passionate about the new can shape, and he makes a strong case for the reasoning behind the new design.

It's all about iconography.

"It's authentic," he explains. Rather than inventing a new shape out of thin air, McGauley contends, "we've taken something we've had around for more than 50 or 60 years."

To utilize such a recognized symbol, he continues, "is to bring iconography to a brand."

McGauley posits that what this new can actually accomplishes is the creation of a stronger, more permanent association between the bow-tie icon and Budweiser, so that years from now, if someone were to see a blank can shaped like a bow tie -- sans any label or brand name, they would instantly recognize it as Budweiser.

In a sense, then, Budweiser is continuing to do what it has always done: innovation as a form of branding.

Having nodded sagely at the epistemology lecture, Gut Check brought up the communal kvetching over the 0.7 ounces of spilled (as it were) beer.

Aren't we now getting less beer for the same price?

The answer is yes...but.

Essentially, for engineering purposes, the new can was forced to shed some interior volume. In order to create the bow-tie shape and maintain the traditional twelve ounces of beer, Budweiser would have had to manufacture a thirteen-ounce can. But in order to do that, the brewer would have had to create an entirely new production line for the thirteen-ounce model. And as we suspected, the new can requires more aluminum (which does cost more, though McGauley did not reveal how much more).

Furthermore, McGauley reveals, Budweiser plans to give back in the near future -- in the form of a 25-ounce can, which -- compute along with us, mathematicians -- will add a full ounce.

McGauley says the traditional-shape Bud can will remain available, and there are no plans for phasing it out. (We get the feeling he'd like to see the new can rise to world dominance, but that's just Gut Check's perception, and therefore subject to beer-goggle vagaries...)

Back to the taste test: Holding the new bow-tie can is a unique experience. It feels incredibly sturdy, pretty much the opposite of a flimsy piece of aluminum you might crush against your forehead. In fact, we found it extremely difficult to even make a dent in the thing.

We'll give McGauley and Bud the benefit of the doubt on the whole piece-of-history aspect. Too deep for Gut Check.

In doing research for this story, Gut Check came across this 2006 article from NPR show All Things Considered, which chronicles the ten-ounce can of Budweiser traditionally sold in Southern Maryland's St. Mary's County. According to NPR's Noah Adams, ten-ounce Budweiser cans have been standard in St. Mary's County for the past 50 years. Listen to the below interview for the full story.