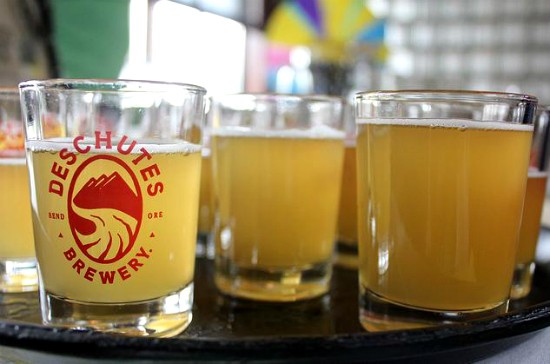 Our beer mugs runneth over here in St. Louis. Bend, Oregon-based Deschutes Brewery, the nation's fifth-largest craft brewery, is set to commence Base Camp for Fanatics, its weeklong campaign to introduce new and specialty beers through tasting events, food pairings and a chance to engage with Woody, a "giant beer barrel on wheels." Base Camp, which began Friday, May 3, with an appearance at St. Louis Microfest

A city of 85,000, Bend is home to fourteen individual breweries, which is kind of crazy. But as Frank explains, Oregon -- and Portland in particular -- "is often referred to as 'Beer-vana,' and is loaded with craft breweries." (It seems there's more than just sullen vampires in the Pacific Northwest.)

Deschutes expanded into Missouri in 2012, and its management team views Base Camp as a chance to win over a local following. Frank points to the burgeoning craft-beer scene as the primary reason for choosing St. Louis as a host city, highlighting local favorites including Schlafly Beer and Urban Chestnut Brewing Company (3229 Washington Avenue; 314-222-0143). 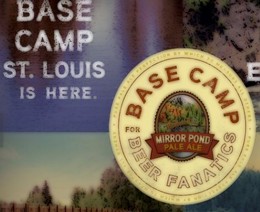 In fact, on Tuesday, May 7, at the International Tap House-Soulard (1711 South Ninth Street; 314-621-4333), Deschutes is collaborating with St. Louis brewery Perennial Artisan Ales (8125 Michigan Avenue; 314-631-7300) for an event called Hats Off to Homebrewers. "It's a grateful nod to, and celebration of, home brewers everywhere, as the craft-beer movement would not exist without them," says Frank. Attendees can pick up home-brewing supplies and recipe books, and also sample a Belgian IPA designed by Perennial Brewmaster Phil Wymore and Deschutes Brewmaster Brian Faivre.

"Throw in a little Stump the Brewer Q&A session, and you have a recipe for awesome!" Frank says.

Another objective of Base Camp week is to break out new, never-before-tasted beers. When asked to describe River Ale, Deschutes' new signature brew, Frank slyly answers our question with a question of his own: "How much flavor can you pack into a small package?" Fair enough. Frank goes on to explain that River Ale is Deschutes' session ale, a low-alcohol-by-volume beer (4 percent) that satisfies the palate while allowing drinkers to consume several pints in one extended "session" without falling off their barstool at the end of the night. This event takes place on Monday, May 6, at Llywelyn's Pub-Webster Groves (17 Moody Avenue, Webster Groves; 314-962-1515) and begins at 6:30 p.m. Representatives from Deschutes will be on hand to talk about their latest beer, along with may of their other selections on tap, and to share in the general merriment.

All in all, Base Camp Week is full of opportunities to try new beers from a brewery that is positioned to fit nicely with the current craft-beer scene in St. Louis.