Sneak Preview: The Libertine Aims to Reclaim Cool in Clayton 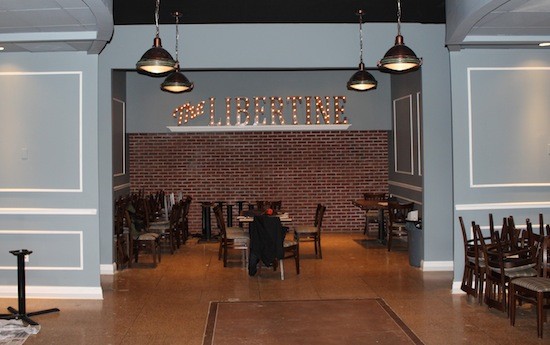 Opening day draws near for The Libertine (7927 Forsyth Boulevard, Clayton). The married team of Audra and Nick Luedde, who moved last year from Chicago to Nick's native St. Louis with their young son, plan to debut their 60-seat restaurant, with acclaimed chef Josh Galliano leading the kitchen, on May 14.

Gut Check stopped by the Libertine last Friday to scope out the Lueddes' renovation of the space, which previously housed the old-school French restaurant Chez Leon.

The Libertine, it will not shock you to learn, looks nothing like Chez Leon.

You enter the restaurant through its bar. The bar itself is a wood construction from Jermain Todd's green design-build-supply firm Mwanzi, while subway tiles frame the back of the bar.

In general, the Lueddes opted for the reclaimed look for the Libertine. The floor of the bar dates back to the space's 1930s incarnation as a Woolworth's, Nick says. The restaurant added one touch to the original floor: its logo.

The walls of the dining room feature exposed brick.

The Lueddes reclaimed the light fixtures in the dining room from a naval shipyard in Maine.

Yes, that is an actual church pew along the wall, salvaged from an Episcopal church.

The Lueddes also redid the entire kitchen. Among the new toys that Galliano and crew can play with are a CVap (controlled vapor technology) oven.

A sense of humor and whimsy is useful during the grueling process of opening a new restaurant.