Gerard Craft To Be Featured in Art Culinaire Magazine [UPDATE]

We thought a chef profile in Art Culinaire, the publication that looks at food as a visual art form, sounded pretty exciting, so we set off to find out who the talented and photogenic chef might be...

Update after the jump.

Turns out, all we had to do was put in a quick call to Art Culinaire. We got editor in chief Melissa Gaman on the phone, and she was able to quell our curiosity. 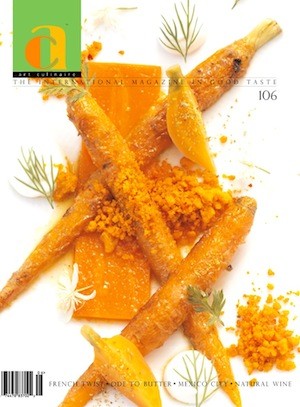 Gerard Craft, chef and owner of Niche, Brasserie, Taste and Pastaria will be featured in issue 106, which will hit mailboxes and news stands in early May. The theme for this issue is butter.

Craft is a four-time James Beard award finalist in the "Best Chef: Midwest" category (he'll find out if he won on May 6) and a major player in the St. Louis food scene. He seems like the obvious local choice for a write-up in a national magazine, but Gaman gave us some more details about why Craft was the perfect ingredient for this issue.

"I think a lot of times what we do here is come up with themes and work backwards and try to think who would be interested in the topic or give an interesting spin on that," Gaman says. "We try to think of something that would make sense, so the chef can have fun with it and be creative."

Gaman told us that Craft provided seven recipes that highlight butter as an ingredient (which, let's be real, could pretty much be anything that's delicious). She also revealed that one of Craft's recipes will be featured on the cover, which has already been released on Art Culinaire's Facebook page.

UPDATE: After we originally posted this, we discovered that our very own RFT contributor Jennifer Silverberg took the stunning photos that will accompany the article. Neither she nor Craft knew that they had made it onto the cover of Art Culinaire until we posted the story, and they both got back to us with comments.

"Gerard knew the photos were for Art Culinaire," Silverberg tells us in an e-mail, "but none of us new that we'd make it onto the cover. I can't speak for Gerard, but I imagine his surprise was based on the cover photograph (as was mine)."

"Being in Art Culinaire has been a career-long dream of mine, but to get on the cover? I never would have guessed," Craft says in an e-mail. "After Ian's tweet, I was in shock and couldn't accomplish anything for the rest of the day! The photo shoot with Jenn was amazing, and everything just clicked that day."

We're excited to see what Craft has cooked up for the magazine, but we can't help but wonder: If the theme is butter, why not feature everybody's favorite diabetic TV personality, Paula Deen?

Yeah, OK, Art Culinaire, maybe you were right to go with Gerard Craft.