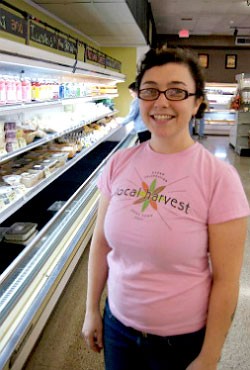 Update: Moore and Sorrell launched their Kickstarter campaign last evening. As of this writing, the project has $1,175 in pledges and 29 days to go. Our original post follows. ---------------------------------------------- In recent months chef Clara Moore moved from St. Louis to Seattle, Washington, leaving her position as executive chef and regional manager of local grocery and restaurant chain Local Harvest Cafe & Catering. She now divides time between her hometown, St. Louis, and Seattle, and she's still a business partner at Local Harvest.

Now comes news that Moore is writing a cookbook and St. Louis grocery-store guide titled Shop Like a Chef: A Food Lover's Guide to St. Louis Neighborhoods, with plans to fund the project through a Kickstarter campaign slated to launch Wednesday, April 24.

Curious to learn more about the book, we gave Moore a call.

"About six years ago I was approached to write a book, a companion to a successful book in Chicago called The Cook's Guide to Chicago -- it was basically a grocery-store guide," Moore says. "I based the book off of that. I pretty much wrote the entire manuscript and then the economy crashed, and I became executive chef at Local Harvest. All those star-crossed things happened, and it didn't go anywhere. I shelved it for about five years, and I pretty much had written it off; it was never going to happen. Now that I've moved on from Local Harvest I have a lot more time, and I decided to pick it up."

Though based in Seattle, Moore has been making trips home to update and edit the book. Moore and the book's co-author, food writer Matt Sorrell, have created a website and Facebook page with information about the book and the forthcoming Kickstarter campaign. On their website, the pair describe the book as a guidebook that highlights:

"...all manner of grocery and specialty stores in the St. Louis area, broken down for easy access into neighborhoods as well as store type. The first set of chapters features about twenty neighborhoods in the metro area, giving a little history of each and the current demography in relation to the grocery stores that remain open today."

Moore is hosting a kickoff party for the Kickstarter campaign Wednesday, April 24, at the Fortune Teller Bar (2635 Cherokee Street; 314-776-2337) from 7 p.m. to midnight with free food and drinks, and iPads will be available for guests to begin making pledges to the campaign.

The Kickstarter campaign runs through Friday, May 24, and Moore plans to have a second party near the end of the campaign to drive pledges one last time.

As a companion to the Kickstarter, Moore will be updating the book's blog once a day for the duration of the campaign with 30 ingredients that can be found in the stores in the book.

"I'll have a little blurb about it, a picture of it and eventually a chance to win some of them, or a package of them," she says.

Moore says the book will be published fall 2013 and available for purchase online and in select St. Louis stores in October.

Books This Just In